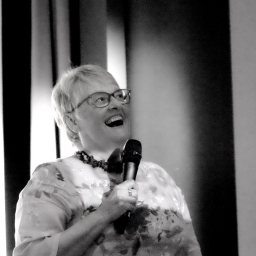 As a professional librarian with more years’ experience than she cares to mention – Tricia has worked in several sectors including government libraries and as a self-employed information specialist but has reverted to her favourite – of working with children, in various guises, for the last 20+ years.

This has included a spell as a primary school librarian, before moving back to public libraries in her home county of Northamptonshire, where she was Head of Children’s and Young People’s Public Library Services and the manager of the Schools’ Library Service – Learning Resources for Education.

She was then Director of the School Library Association (an independent charity) between 2008-2018.  She had the honour to be Chair of the Carnegie and Kate Greenaway judging panel and Youth Libraries Group during 2008 and 2017. She now fills her time with volunteering for the Federation of Children’s Books, is Chair of the newly formed Northamptonshire CBG, Co-ordinates the National Share a Story Month initiative and is a newly appointed Trustee of the English Association.  She continues to work with Youth Libraries Group and she also leads training sessions, as well as reviewing for several organisations.

A lifelong love of reading and collecting children’s books, amongst other topics, has created a collection so rambling that the house has to be extended every few years!

Forna has taken her own experiences of sexism and racism that she experienced as a woman from Sierra Leone living in the US on which to base this novel. This has created a powerful depiction of the oppression and cruelty meted out to women who are different from a society’s accepted roles.   Set in the patriarchal fantasy world of Otera, this is based in an ancient kingdom, where a woman’s worth is only as good as her proven purity. This purity is proven by the woman being made to bleed – in a brutal ceremony ... View Full Review

This book is set 17 years before the action in Angie Thomas’s The Hate U Give – showing how Star’s father in THUG became the man he is.    Maverick is an average teenage boy in the Garden Heights area – selling drugs to help the budget at home as his father is in prison.  His Mum works two and sometimes three jobs to try to make ends meet – and Maverick knows he needs to graduate High School to stand any chance of becoming the man he wants to be.   That is, ... View Full Review

Holly Black writes amazing fantasy set in the land of Faerie. She has thrilled us with The Folk of the Air Trilogy – but this delightful novella takes a deeper look at the early life of the cruel King Cardan from the trilogy – offering some insights as to why he becomes the adult he is and how his early influences contributed.     For such a short book (only 173 pages) it is filled with high romance, terrifying danger and touches of humour that will appeal to both established fans and new readers alike. Starting in Cardan&... View Full Review

This novel moves from poetry to prose, and back again, as it explores a girl’s relationship with her Grandfather.  Mizuki can see something is deeply troubling to her Grandfather Ichiro, but she can’t find its source, except it is somehow connected with an old book and Ichiro’s need to create origami paper cranes from it.    Mizuki’s worries are expressed in verse before we jump back into prose - to the at times brutal description of the day the bomb fell on Hiroshima and Ichiro’s role in that ... View Full Review