SHORTLISTED FOR THE WOMEN'S PRIZE FOR FICTION 2020 'A story for now, an important story . . . told with incredible freshness' Martha Lane Fox, Chair of Judges, Women's Prize 2020 'The harsh reality of immigration is balanced with a refreshing dose of humour' The Times 'This compassionate and ingenious novel has an endearing vibrancy in the storytelling that, page after page, makes it addictive reading' Irish Times 'Engrossing . . . the story itself and Ana, the protagonist are terrifically interesting. Loved this' Roxane Gay 'This book is a valentine to my mom and all the unsung Dominicanas like her, for their quiet heroism in making a better life for their families, often at a hefty cost to themselves. Even if Dominicana is a Dominican story, it's also a New York story, and an immigrant story. When I read parts of Dominicana at universities and literary venues both here and abroad, each time, audience members from all cultures and generations came up to me and said, this is my mother's story, my sister's story, my story' Angie Cruz Fifteen-year-old Ana Cancion never dreamed of moving to America, the way the girls she grew up with in the Dominican countryside did. But when Juan Ruiz proposes and promises to take her to New York City, she must say yes. It doesn't matter that he is twice her age, that there is no love between them. Their marriage is an opportunity for her entire close-knit family to eventually immigrate. So on New Year's Day, 1965, Ana leaves behind everything she knows and becomes Ana Ruiz, a wife confined to a cold six-floor walk-up in Washington Heights. Lonely and miserable, Ana hatches a reckless plan to escape. But at the bus terminal, she is stopped by Cesar, Juan's free-spirited younger brother, who convinces her to stay. As the Dominican Republic slides into political turmoil, Juan returns to protect his family's assets, leaving Cesar to take care of Ana. Suddenly, Ana is free to take English lessons at a local church, lie on the beach at Coney Island, dance with Cesar at the Audubon Ballroom, and imagine the possibility of a different kind of life in America. When Juan returns, Ana must decide once again between her heart and her duty to her family. In bright, musical prose that reflects the energy of New York City, Dominicana is a vital portrait of the immigrant experience and the timeless coming-of-age story of a young woman finding her voice in the world.

This stunner of a novel thrums with vitality, a singular addition to the canon of immigration narratives, and introduces readers to the wonderfully complex and resilient Ana * Nylon * Cruz tells the story with a raucous sense of humour and writes in short, present-tense chapters that help make this a propulsive though heartbreaking read * BuzzFeed * In Cruz's rendering, the inevitability of hardship and the excitement of new possibilities makes for an affectingly complex journey into adulthood. Expect this to mark the author's breakout * Entertainment Weekly * Sensational . . . At once tender, musical, and electric, this novel meditates on how immigrations shapes lives, from both without and within * Esquire * Cruz (who drew the story from her mother's experience) keeps the tone light, even comic, while expertly generating tension from the plot's mounting tally of secrets and lies * Metro * An intimate portrait of the transactional nature of marriage and the economics of both womanhood and citizenship * New York Times Book Review * Poignant . . . In nimble prose, Cruz animates the simultaneous reluctance and vivacity that define her main character as she attempts to balance filial duty with personal fulfilment, and contends with leaving one home to build another that is both for herself and for her family * New Yorker * A . . . portrait of what it means to be doubly disenfranchised as a female illegal immigrant in an oppressively patriarchal community, but Angie Cruz gives her heroine a glimpse of a different life * Observer * This compassionate and ingenious novel has an endearing vibrancy in the storytelling that, page after page, makes it addictive reading * Irish Times * The harsh reality of immigration is balanced with a refreshing dose of humour * The Times * Through a novel with so much depth, beauty, and grace, we, like Ana, are forever changed * Jacqueline Woodson, Vanity Fair * Engrossing . . . the story itself and Ana, the protagonist are terrifically interesting. Loved this * Roxane Gay * A story for now, an important story . . . told with incredible freshness * Martha Lane Fox, Chair of Judges, Women's Prize 2020 *

Angie Cruz is the author of the novels Dominicana, Soledad, and Let It Rain Coffee, a finalist in 2007 for the IMPAC Dublin Literary Award. She has published work in the New York Times, VQR, Gulf Coast Literary Journal, and other publications, and has received fellowships from the New York Foundation of the Arts, Yaddo, and the MacDowell Colony. She is founder and editor in chief of Aster(ix), a literary and arts journal, and is an associate professor of English at the University of Pittsburgh. Dominicana is inspired by her mother's story and was shortlisted for the Women's Prize for ... 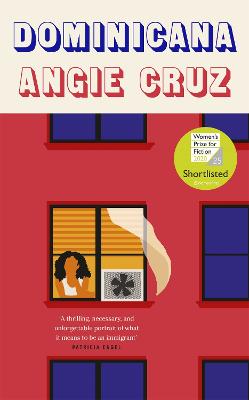 View All Books By Angie Cruz