'The Harpy is brilliant . . . A deeply unsettling, excellent read.' - Daisy Johnson, author of Everything Under Lucy and Jake live in a house by a field where the sun burns like a ball of fire. Lucy works from home but devotes her life to the children, to their finely tuned routine, and to the house itself, which comforts her like an old, sly friend. But then a man calls one afternoon with a shattering message: his wife has been having an affair with Lucy's husband, he wants her to know. The revelation marks a turning point: Lucy and Jake decide to stay together, but in a special arrangement designed to even the score and save their marriage, she will hurt him three times. Jake will not know when the hurt is coming, nor what form it will take. As the couple submit to a delicate game of crime and punishment, Lucy herself begins to change, surrendering to a transformation of both mind and body from which there is no return. Told in dazzling, musical prose, The Harpy by Megan Hunter is a dark, staggering fairy tale, at once mythical and otherworldly and fiercely contemporary. It is a novel of love, marriage and its failures, of power and revenge, of metamorphosis and renewal.

On one level it is the psychological excavation of a suburban marriage on the rocks, on another, a spell to summon primeval feminine power. Above all, it is prose informed by poetry . . . a brilliant and eviscerating work of literary fiction * Review 31 * Extraordinary . . . The End We Start From is reminiscent of Cormac McCarthy's The Road, in that it shares the same narrative detachment, and the same precise poetry. It is of course told from the perspective of a mother, rather than a father, and is set in a world that is only beginning to fall into chaos. And in the midst of it all, each parent cradles their child, enchanted by their breathing. Sometimes he sleeps so quietly it seems that he has gone. Megan Hunter's remarkable debut novel feels like the other half of the story -- Financial Times on The End We Start From The End We Start From is a beautifully spare, haunting meditation on the persistence of life after catastrophe. I loved it -- Emily St. John Mandel, author of Station Eleven on The End We Start From Powerful . . . an uplifting celebration of the reality of motherhood in the face of terrifying global disaster -- Daily Mail on The End We Start From Hunter's spare, drumskin-tight prose zings off the page, and ingenious descriptions abound . . . It may only consist of 127 pages of impressionistic, staccato sentences, but this is a book of wide horizons and big ideas, and it's no surprise that Benedict Cumberbatch's company have just acquired movie rights. For Hunter the future looks very bright indeed -- Scotland on Sunday on The End We Start From Startling . . . beautiful and insightful. Everyone who reads this will come away feeling renewed -- Elle Magazine on The End We Start From Engrossing, compelling -- Naomi Alderman, author of The Power on The End We Start From I was moved, terrified, uplifted - sometimes all three at once -- Tracy Chevalier, author of Girl With a Pearl Earring on The End We Start From Megan Hunter effortlessly compels us to feel both heartbreak and the momentary gratification of revenge . . . devastating in its evocation of the expense and sometimes fatal strain of passion, grief, and rage.' -- Susanna Moore, author of In the Cut In hungry, restless prose, Megan Hunter tears apart the seam between motherhood and the monstrous. She confronts the fear of female anger and asks us what happens when pain that has been swallowed through generations begins to rush to the surface. -- Jessica Andrews, author of Saltwater The Harpy is a taut and lyrical novel about cosily calibrated lives coming spectacularly undone. Compulsively absorbing yet otherworldly, both a fever dream and a gorgeous and alarming howl of rage. -- Sharlene Teo, author of Ponti A beautifully written, viscerally disturbing novel that turns the narrative of the cheated-on wife on its head -- Laura Kaye, author of English Animals A sharp, timely and darkly funny novel about maternal love and sacrifice, and the incandescent rage that festers beneath it. Hunter's writing is beautiful and spare, uncanny and hilarious. I utterly loved it. -- Luiza Sauma, author of Flesh and Bone and Water I was utterly spellbound. Her dark humour and pointillist prose puts her in league with Lydia Davis and Jenny Offil, masterfully rendering the emotional shock of a protagonist finding her life has become story. -- Olivia Sudjic, author of Sympathy Utterly compelling . . . so precise and darkly truthful. I thought it succeeding in illuminating - with flair and originality - the damage done by betrayal. -- Esther Freud Sentence after sentence made my skin bump. Not just with what the sentence said, but because the writing was so very, very good. It's a brilliant piece of work. -- Cynan Jones, author of Cove The Harpy is an almost perfect book. The premise is so simple, and the execution so flawless . . . I've talked about it more than anything else I've read so far this year: I love explaining the set-up to friends and watching their eyes widen. It's so dark and so much fun. -- Kristen Roupenian, author of Cat Person In The Harpy, Hunter has articulated female rage in a way that lives on in your bones and in your gut. A genuinely thrilling read, one long beautiful scream. -- Evie Wyld The Harpy is brilliant. Hunter imbues the everyday with apocalyptic unease. A deeply unsettling, excellent read. -- Daisy Johnson, Booker shortlisted author of Everything Under

Megan Hunter's first novel, The End We Start From, was published in 2017 in the UK, US, and Canada, and has been translated into eight languages. It was shortlisted for Novel of the Year at the Books Are My Bag Awards, longlisted for the Aspen Words Prize, was a Barnes and Noble Discover Awards finalist and won the Foreword Reviews Editor's Choice Award. Her writing has appeared in publications including the White Review, the TLS, Literary Hub, and BOMB magazine. She lives in Cambridgeshire with her husband, son and daughter. 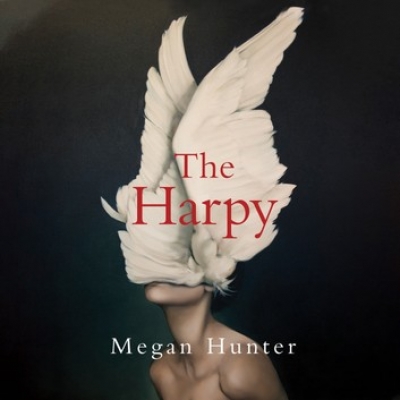 View All Books By Megan Hunter