The Second Half Synopsis

Shortlisted for the Autobiography of the Year at the British Sports Book Awards 2015.

Shortlisted for the Football Book of the Year Award at the British Sports Book Awards 2015.

In an eighteen-year playing career for Cobh Ramblers, Nottingham Forest (under Brian Clough), Manchester United (under Sir Alex Ferguson) and Celtic, Roy Keane dominated every midfield he led to glory. Aggressive and highly competitive, his attitude helped him to excel as captain of Manchester United from 1997 until his departure in 2005. Playing at an international level for nearly all his career, he represented the Republic of Ireland for over fourteen years, mainly as team captain, until an incident with national coach Mick McCarthy resulted in Keane's walk-out from the 2002 World Cup. Since retiring as a player, Keane has managed Sunderland and Ipswich and has become a highly respected television pundit. As part of a tiny elite of football players, Roy Keane has had a life like no other. His status as one of football's greatest stars is undisputed, but what of the challenges beyond the pitch? How did he succeed in coming to terms with life as a former Manchester United and Ireland leader and champion, reinventing himself as a manager and then a broadcaster, and cope with the psychological struggles this entailed? In a stunning collaboration with Booker Prize-winning author Roddy Doyle, THE SECOND HALF blends anecdote and reflection in Roy Keane's inimitable voice. The result is an unforgettable personal odyssey which fearlessly challenges the meaning of success.

Roy Keane's book is a masterpiece: The Second Half gives a startling account of his colourful career and reveals the hard-man midfielder's long-hidden good points... Keane's book, ghost-written by Roddy Doyle, is an endlessly absorbing piece of work. It may well be the finest, most incisive deconstruction of football management that the game has ever produced -- Patrick Collins THE MAIL ON SUNDAY

There is much in Roy Keane's new book that is thoughtful and self-mocking, insightful and funny -- George Caulkin THE TIMES

Roddy Doyle's works, mostly set in a fictional Dublin suburb, often star quietly frustrated everymen, and it's this book's achievement to make you see its mighty subject in that light -- Anthony Cummins TELEGRAPH

It is the dearth of integrity that makes Pietersen such a peevish, trifling character, and the surfeit that makes Keane so entrancingly epic... the personification of honest to a fault... he is as close as sport can offer to an Old Testament prophet. Heroically unconcerned with being loved, almost insanely devoted to telling what he regards as the plain truth, he may not always be engaging. But... he stands out as utterly and irreducibly true to himself -- Matthew Norman THE INDEPENDENT

The best things are the small things: regretting joining Ipswich when he discovered the training kit was blue; refusing to sign Robbie Savage because his answerphone message was rubbish; being appalled that his side had listened to an Abba song before playing football. The irrational, blistering intolerance is delicious. Keane famously detested yes-men; he created himself as the ultimate no-man. And he's still here -- Dan Jones EVENING STANDARD

I've just got my copy of The Second Half and although I'm only a couple of chapters into it, it has not disappointed. People have their own opinions of Roy and some would be fearful of him, given how outspoken he can be. I have always judged people how I find them and I can honestly say I have never found a fault in him... He had a fabulous career and I know I'm going to enjoy reading about it -- Jamie Carragher DAILY MAIL

When Keane says anything, listening is usually the best option. He's scarily extreme, dangerously provocative, oxy-acetylene forthright... and hugely entertaining... Self-desctruction, self-pity, self-laceration - his latest unburdening has all this and more. His book reveals more flaws and admits to more mistakes than Sir Alex Ferguson did in his last literary effort - and Keane's is much funnier -- Aidan Smith SCOTLAND ON SUNDAY

I'm surprised how much Roy Keane's second autobiography made me laugh... More importantly the book told me that Keane should be the next Manchester United manager. The more I read what he had to say, and his reflections on his two jobs as boss, the more I realised how perfect he would be at Old Trafford -- Adrian Durham MAIL ONLINE

A book that offers great insight into the modern manager's job... The book does not attempt to deflect the mistakes Keane made but it adds a dimension to the man. Especially in his reflections on small details of behaviour, and there are scores of them... Keane must hope that the decision-makers in football take the trouble to read the book itself -- Sam Wallace i NEWSPAPER 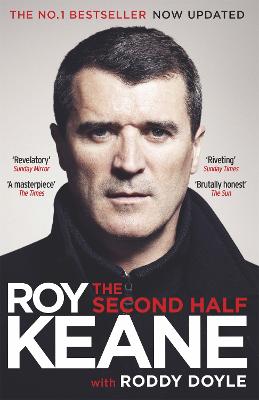 Roy Keane was born in Cork in 1971, and is now a television pundit for ITV after an astonishingly successful football career as captain of Manchester United and Ireland. He is currently the assistant manager of the Republic of Ireland and Aston Villa teams.   Roddy Doyle was born in Dublin in 1958 and still lives there today. He is the author of ten acclaimed novels including THE COMMITMENTS, THE SNAPPER, THE VAN and most recently THE GUTS; two collections of short stories; RORY & ITA, a memoir about his parents; and TWO PINTS, a collection of dialogues. He won the Booker ...