We Need to Weaken the Mixture

Guy Martin: My Autobiography My Life at Breakneck Speed 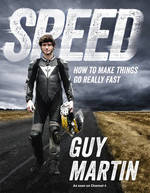