Winner of the 'Best of the Best' children's category at the Independent Bookshop Week Awards 2016.

Frank, powerful, warm and often heart-breaking, Wonder is a book you'll read in one sitting, pass on to others, and remember long after the final page. This is a wonderful debut from a storyteller with a great future if this book is anything to go by and her characters are intensely likeable.

'My name is August. I won't describe to you what I look like. Whatever you're thinking, it's probably worse.' Ten-year-old August Pullman wants to be ordinary. He does ordinary things. He eats ice-cream. He plays on his Xbox. He feels ordinary - inside. But Auggie is far from ordinary. Born with a terrible facial abnormality, he has been home-schooled by his parents his entire life, in an attempt to protect him from the cruelty of the outside world. Now, Auggie's parents are sending him to a real school. Can he convince his new classmates that he's just like them, underneath it all? Narrated by Auggie and the people around him whose lives he touches, Wonder is a frank, funny, astonishingly moving debut to be read in one sitting, pass on to others, and remember long after the final page.

'The breakout sensation of 2012... Wonder is destined to go the way of The Curious Incident of the Dog in the Night Time... dark, funny, touching. No Tube carriage will be without a copy this year' The Times

'Gripping - I'd really recommend it to anybody. It's a young adult book book about a little boy who's born with a disfigured face, written from his point of view... charming, brutal and brilliant' Observer

'I'd defy anyone not to well up when he cries: Why do I have to be so ugly, Mommy? , and as for the climax, it wreaks emotional havoc. There is a message running through the book, most clearly voiced by an inspirational teacher, that if we were all a little kinder to one another the benefit would be incalculable. To finish it with a firm resolve to be a better person - well, you can't ask much more of any book than that' Independent

R J Palacio is a graphic designer by day and a writer by night. She lives in New York City with her family and a black dog called Bear. 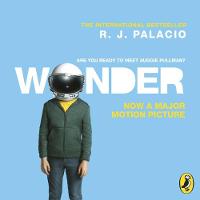