LoveReading Expert Review of The Radleys

Shortlisted for the Galaxy Popular Fiction Book of the Year Award 2011.

I am told the vampire craze is on the wane to be replaced by zombie books but the great thing about vampires is they are human and none more so than Matt Haig’s Radleys, an abstaining vampire family with two teenagers who are not having the greatest time at school. The girl gets pestered by an over zealous boy and she bites him … Things change rather dramatically then as she slowly discovers her roots. Mum and Dad have a fair bit of explaining to do and then a ‘wicked’ uncle appears on the scene. This is well thought out, humorous, highly compulsive and a pure delight

Dripping in blood, this is a story of family secrets so terrible that they shouldn’t be uncovered...Rowan and Clara think they are ordinary teenagers. They live quietly with their ordinary Mum and Dad doing all the things that their friends do. But, the Radley parents are hiding a secret; they are abstaining vampires and, one day, their abstinence will fail. Rowan’s teenage anxieties and sense of being an outsider take on a whole new dimension in this insight story of adolescence with a difference.

This is the Young Adult version of the title.  Click here for the original edition.

A message from the author:

"This is a story about growing up, first and foremost.  About how we learn to come to terms with who we are, independent of the ideas our parents had for us.  About how we decide our own identities.  As well as what shapes those identities - who we choose to love, and hate, admire and fear.  It is about how denying ourselves can sometimes be more dangerous than succumbing to tempation.  This is the story I wanted to tell. I never set out to write a vampire story, but vampires were the obvious choice.  After all, as family secrets go, you can't get much bigger than finding out you are actually a full-blown creature of the night.  And hopefully it fits as a metaphor for teenage life.  A life full of physical changes, forbidden cravings, and feelings of being an outsider.  In that sense, we've probably all been vampires at some stage."

FAMILIES. SOMETIMES THEY'RE A BLOODY NIGHTMARE . . . Life with the Radleys: Radio 4, dinner parties with the Bishopthorpe neighbours and self-denial. Loads of self-denial. But all hell is about to break loose. When teenage daughter Clara gets attacked on the way home from a party, she and her brother Rowan finally discover why they can't sleep, can't eat a Thai salad without fear of asphyxiation and can't go outside unless they're smothered in Factor 50. With a visit from their lethally louche Uncle Will and an increasingly suspicious police force, life in Bishopthorpe is about to change. Drastically.

What To Read After The Radleys

'Dripping in blood, this is a story of family secrets so terrible that they shouldn't be uncovered.' - Guardian 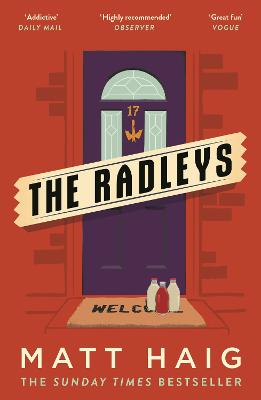 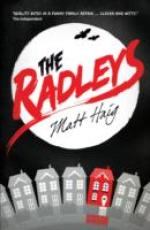 Matt Haig is an author for children and adults. His memoir Reasons to Stay Alive was a number one bestseller, staying in the British top ten for 46 weeks. His children’s book A Boy Called Christmas was a runaway hit and is translated in over 40 languages. It is being made into a film starring Maggie Smith, Sally Hawkins and Jim Broadbent and The Guardian called it an ‘instant classic’. His novels for adults include  the award-winning How To Stop Time, The Radleys, The Humans and the number one bestseller The Midnight Library. He has sold ...

View All Books By Matt Haig