The Naming of Names

LoveReading View on The Naming of Names

This is an absolute must for all plant lovers.  From the author of the highly regarded The Tulip comes a thrilling adventure into botanical history; a compelling insight to the men who first named plants, wrote about their similarities and differences and who grouped and ordered them over hundreds of years beginning in Athens in the third century BC.  This journey traced here so exhilaratingly by Anna Pavord is a world full of intrigue and intensely competitive egos.

The Naming of Names Synopsis

As is well known, a comprehensive system of naming, of ordering and classifying, embraces every known plant in the world. In The Naming of Names Anna Pavord takes us on a thrilling adventure into botanical history â€” from the Guyanan jungle to Renaissance Europe, Ancient Greece and sixteenth-century London â€” to show how nature was rationalised in a way that could be understood in countries and languages throughout the world. For the first time, Anna Pavord shows how the business of naming plant names, which had begun with the Greek philosopher Theophrastus in the third century BC, occupied the best minds in Europe for at least three hundred years until, in 1973, the process came to an end with a Swedish book about sex â€¦

The whole vibrant array of plant life is contained within these pages: flamboyant, irresistible superstars like fritillaries, anemones, lilies, crocus, iris and tulips; everything from the agave and the banana to the paony and the yucca. 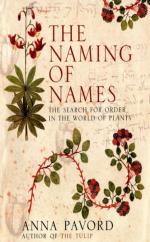 Anna Pavord is the gardening correspondent for the Independent and the author of several books including the internationally acclaimed bestseller, The Tulip. As well as writing for the Observer for twenty years, she has contributed to Country Life, Country Living and Elle Decoration, and is an associate editor of Gardens Illustrated. Photograph © George Wright

View All Books By Anna Pavord