One of my very favourite authors with a mystery that twists and turns through a plot that straddles 23 years and has the search for a 17th century book at its centre. You must read this first chapter, it’s stunning. I would then urge you to read the whole book and his others. In true Goddard style you are never really certain which of the many threads you are following is the real crux of the mystery. Is it the suspected murder of a kidnapped child, the old book or a mysterious historian who seems to have disappeared? All the paths leave you furiously turning the pages. He is very special.

It is a hot summer’s day in the tourist village of Avebury.A man sits outside the Red Lion pub, waiting. He sees a woman with three young children, two of them running ahead while their sister dawdles behind. A child’s voice catches on the breeze. For want of anything more interesting to do, the man watches. He sees nothing sinister or threatening. Even when another figure enters his field of vision, he does not react. The figure is ordinary - male, short-haired, stockily built.But he is moving fast, at a loping run. And then it happens. In one swift movement, the running man grabs the youngest child and carries her away. Still the man outside the pub does not react. Suddenly, awhite transit van bursts into view, its engine racing, its rear door slamming shut.The child and her abductor are inside. The child’s sister rushes forward. The man outside the pub jumps up… The tragedy begins at Avebury.But it does not end there. 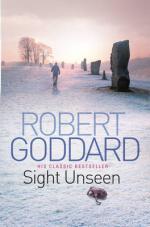 Robert Goddard was our Guest Editor in March 2011 - click here - to see the books that inspired his writing.   Robert Goddard was born in Hampshire. He read History at Cambridge and worked as an educational administrator in Devon before becoming a full-time novelist. His bestselling novels are: Past Caring, In Pale Battalions, Painting the Darkness, Into the Blue (winner of the first WH Smith Thumping Good Read Award and dramatized for TV in 1997, starring John Thaw), Take No Farewell, Hand in Glove, Closed Circle, Borrowed Time, Out of the Sun (a sequel to Into the Blue), Beyond Recall, ...

View All Books By Robert Goddard