LoveReading View on The Babylon Gene

Ancient conspiracies, freemasonry, jihadists and the CIA are all mixed together in this fast-paced action thriller. What if the first weapon of mass destruction was created more than 1,000 years ago? - a secret passed down through generations.  What if America discovered the secret and wanted the knowledge at any cost? A complex plot brimming with expert knowledge of everything from Freemasonry to genetics, Christian mythology to military tactics and well worth putting the time aside to get properly immersed.

2004: when violent Jihadists bomb a Masonic lodge in Istanbul, the Turkish military enlist maverick British agent Toby Ashe to find the cause of the attack. Hurled into a tense race against the CIA to solve an intelligence puzzle encompassing genetic research, a covert SAS mission, the true origins of Freemasonry, and the strange disappearance of the leader of a Kurdish mystical religion, Ashe must travel the globe in pursuit of answers.What if the invasion of Iraq was nothing to do with WMD? What if America wasn't motivated by oil, or regime change? What if the world's largest superpower was driven by a desire to find something far more dangerous - a viral weapon passed down through history ...Explosive, fast-paced and brimming with expert knowledge of everything from Freemasonry to genetics, Christian mythology to military tactics, The Babylon Gene takes the conspiracy thriller to a whole new level. 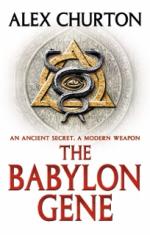 Alex Churton is a writer and composer. He was the founder editor of Freemasonry Today, and is an acknowledged expert on Western Esotericism. He is the author of ten non-fiction titles on subjects such as alchemy, the Rosucrucians and Judas. This is his first novel.

View All Books By Alex Churton