We have in Andrew Robinson Stoney the deepest dyed of villains, we have a heroine in Mary Eleanor Bowes and we have Georgian society and law showing little mercy for women fighting for release from men such as Stoney. And if this incredible story resembles fiction we discover that Thackeray based his novel, Barry Lyndon on this whole sorry case.

Like for Like Reading
Lady Worsley’s Whim: An Eighteenth Century Tales of Sex, Scandal and Divorce, Hallie Rubenhold
The Gentleman’s Daughter: Women’s Lives in Georgian England, A Vickery

WEDLOCK is the remarkable story of the Countess of Strathmore and her marriage to Andrew Robinson Stoney. Mary Eleanor Bowes was one of Britain's richest young heiresses. She married the Count of Strathmore who died young, and pregnant with her lover's child, Mary became engaged to George Gray.

Then in swooped Andrew Robinson Stoney. Mary was bowled over and married him within the week. But nothing was as it seemed.

Stoney was broke, and his pursuit of the wealthy Countess a calculated ploy. Once married to Mary, he embarked on years of ill treatment, seizing her lands, beating her, terrorising servants, introducing prostitutes to the family home, kidnapping his own sister. But finally after many years, a servant helped Mary to escape.

She began a high-profile divorce case that was the scandal of the day and was successful. But then Andrew kidnapped her and undertook a week-long rampage of terror and cruelty until the law finally caught up with him.

'Moore, mistress of suspense, writes in the gripping language of a thriller...This book has it all - the blackest of villains, the strongest friendship, kidnap, abortions, riches and all completely true.'

'Beginning with a bloody duel and the deathbed marriage of one of the combatants, this torrent of a biography sweeps the reader along... Mary's prolonged, audacious struggle to extricate herself from this marriage is a natch for Hollywood.'
INDEPENDENT

Wendy Moore began her first newspaper job at the age of nineteen. Initially working as a crime reporter, tracking stories such as the Dennis Nielsen murders, she was switched to reporting health issues.Having always been interested in history, Wendy began researching the history of medicine several years ago. In 1999 she completed the Diploma in the History of Medicine of the Society of Apothecaries (DHMSA) and won the Maccabean prize for the best dissertation that year. Soon afterwards she decided to write a biography of John Hunter, the 18th-century surgeon who launched a revolution in medicine. The book, The Knife ... 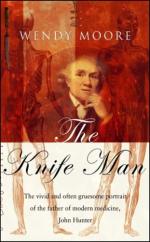 View All Books By Wendy Moore