In a dramatic climax to The New Policeman Trilogy, the time is the end of the 21st century and climate change has wiped out a whole country leaving it unable to support its pitiful population. Those who are left are enslaved by the wealthy war lords. There are problems too in Tir na n'Og where refugees are flooding into through weak borders. The King of the Fairies is determined to find out why. Now old, JJ Liddy must go on a journey back across time and find out what his successors are up to. But can he remember the complicated trick he needs to do to make it happen? A typically thoughtful ending to a highly inventive and lyrically written series.

An almost dead cert for being shortlisted for the various major children’s book awards so watch this space.

It is the latter part of the 21st century, and dramatic climate change has made life in Ireland almost impossible. Meanwhile, Tir na n'Og is faced with a refugee problem, and the king of the fairies is not happy about it and when it is revealed that the warlord who is behind the problem is a member of the Liddy family, JJ is sent to sort him out...Following on from The New Policeman and The Last of the High Kings , The White Horse Trick travels from the now to far distant futures: from world's end to world's beginning.

Kate Thompson is one of the most exciting authors writing for young people today for she is a born storyteller, is highly original and thought-provoking in her ideas. She has travelled widely in the USA and India and studied law in London. After living in County Clare, she moved to Kinvara in County Galway and there, three years ago, she discovered her passion for playing the fiddle. She is now an accomplished player and also has a great interest in restoring instruments. Kate Thompson has won the Children’s Books Ireland Bisto Book of the Year award three times &... 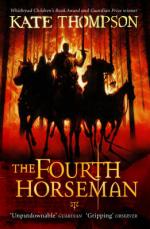 View All Books By Kate Thompson