LoveReading View on The Remorseful Day

The final Morse novel in which we say a sad farewell to one of the best characters ever created in a crime novel. Beautifully written not only is there another cracking case to solve but a tender and moving insight in to one of the great fictional detectives of our time. A brilliant goodbye to a sensational series of books.

'Where does this all leave us, sir?' 'Things are moving fast.' 'We're getting near the end, you mean?' 'We were always near the end.' The murder of Yvonne Harrison had left Thames Valley CID baffled. A year after the dreadful crime they are still no nearer to making an arrest. But one man has yet to tackle the case - and it is just the sort of puzzle at which Chief Inspector Morse excels. So why is he adamant that he will not lead the re-investigation, despite the entreaties of Chief Superintendent Strange and dark hints of some new evidence? And why, if he refuses to take on the case officially, does he seem to be carrying out his own private enquiries? For Sergeant Lewis this is yet another example of the unsettling behaviour his chief has been displaying of late ... 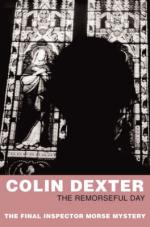 Colin Dexter graduated from Cambridge University in 1953 and has lived in Oxford since 1966.His first novel, Last Bus to Woodstock, was published in 1975 and there are now twelve novels in the Inspector Morse series, most recently The Daughters of Cain and Death is Now My Neighbour. In 1989 The Wench is Dead was awarded a Gold Dagger by the Crime Writers' Association for best crime novel of the year, as was The Way Through the Woods in 1992, and Colin Dexter has also been awarded Silver Daggers for Service of all the Dead and The Dead of Jericho. Death is Now ...