A great read, do try it. The playboy son of a cabinet minister is murdered at his own party. Six guests could, and indeed had reason to do it. We follow the background, in first persons, to all six, culminating in the unravelling of a complicated plot. The suspects range from Bollywood superstar to street urchin and each presents a fascinating slice of Indian life. I loved this book. Intelligent, full of political corruption, dirty dealing, innocent folk caught up in extraordinary circumstances, it is exciting, witty, satirical, pensive and the most enormous fun. The author’s first novel, Q & A, is filmed as Slumdog Millionaire. I’ve not seen the film but do highly recommend the book. It’s wonderful.

Seven years ago, Vivek ‘Vicky’ Rai, the playboy son of the Home Minister of Uttar Pradesh, murdered Ruby Gill at a trendy restaurant in New Delhi simply because she refused to serve him a drink. Now Vicky Rai is dead, killed at his farmhouse at a party he had thrown to celebrate his acquittal. The police search each and every guest. Six of them are discovered with guns in their possession.

In this elaborate murder mystery we join Arun Advani, India’s best-known investigative journalist, as the lives of these six suspects unravel before our eyes: a corrupt bureaucrat; an American tourist; a stone-age tribesman; a Bollywood sex symbol; a mobile phone thief; and an ambitious politician. Each is equally likely to have pulled the trigger. Inspired by actual events, Vikas Swarup’s eagerly awaited second novel is both a riveting page turner and an insightful peek into the heart and soul of contemporary India.

'I do not normally recommend crime novels more than 500 pages long, but I am making an exception with Vikas Swarup. It's unusual, witty, quirkly, cleverly plotted, intelligent, and along the way it's an informative satire on Indian politics and values…a rollicking good read.' Marcel Berlins, Times

'Much to enjoy..the solution in the final pages is particularly cunning.' Telegraph

'Swarup has a redeeming eye for the disparites that define Indian society.' Guardian

Vikas Swarup is the author of the bestselling sensation Q&A, which was filmed as the Oscar-winning Slumdog Millionaire, and Six Suspects. His novels have been translated into more than forty languages. Vikas Swarup was a judge on 2011's Man Asian Literary Prize.  Swarup currently works in the Ministry of External Affairs in New Delhi.   Author photo © Vikas Swarup 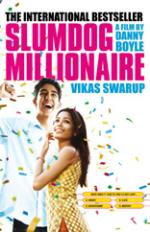