Controversially, and in my opinion inappropriately, long-listed for the Man Booker and appropriately short-listed for the Costa 1st Novel award (used to be the Whitbread), the Desmond Elliot prize and winner of the Crime Writers’ Association Ian Fleming award, this is a cracking good serial killer tale set in Stalin’s 1950’s Russia. It is certainly one of the best intelligent new thrillers I have read in a long time. Atmospheric, dark, evocative of the period and era, the gradual change in our hero is beautifully handled, as is the slow build in an intriguing plot. You must read it. We also have an exclusive pre-publication extract from his new book The Secret Speech, so be one of the first to read a chapter before it's published.

Winner of the Galaxy New Writer of the Year 2009.

When fear silences a nation, one man must speak the truth.

Stalin's iron grip is at its tightest, enforced by the Ministry of State Security - a secret police force whose brutality is no secret at all. Under its regime, the people are commanded to believe that crime simply does not exist.

But when the body of a young boy is discovered on train tracks in Moscow, Officer Leo Demidov - a war hero, utterly dedicated to the ministry - is surprised to hear that the boy's family are convinced it was murder. Leo's superiors order him to ignore this and he is obliged to obey. But something in him knows there is more.

Sensing his doubts, the Ministry threatens Leo, giving him no choice but to turn his back on his once-beloved Party. Disgraced, exiled with his wife Raisa to a town deep in the Ural Mountains, Leo realises that the crime he helped cover up in the capital has happened here too.

The murder of another child.

Risking everything, Leo and Raisa will pursue a horrifying killer - even if doing so makes them enemies of the State... 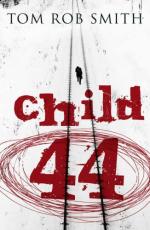