LoveReading View on Girls are Best

Women gladiators, women in the Bayeaux Tapestry, women inventors, Sandi Toksvig uncovers them all in her light hearted approach to the serious message of this book – women have always done amazing things but have mostly been overlooked by history. There’s a mass of facts and information of all kinds including scientific evidence that women’s brains are as good as boys but wired differently and that the first woman to swim the channel was faster than any boy who had done it before (14hrs, 31mins. The result is a book which will make girls realise that anything is possible – and that women have already done most of everything already!

For as long as history has been recorded, girls haven't had much of a look in amongst all the great men we remember. But that doesn't mean they weren't there. And it doesn't mean that they didn't achieve great things, come up with wonderful inventions or win battles!

Lots of people have heard of Joan of Arc, Boadicea and Florence Nightingale, but . . . Did you know that there were actually female Gladiators - Gladiatrices? Or that Nimkasi was the Sumerian Goddess of Beer? Or that it was Mary Jacob Phelps who invented the bra?

In this book, Sandi Toksvig shows that His-tory is actually Her-story. Though they're often ignored or overlooked, they have changed the world. There's no question about it . . . Girls are best! 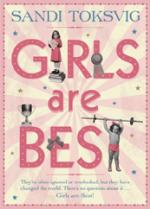 Sandi Toksvig is a well known broadcaster for both television and radio, hosts The News Quiz on BBC Radio 4 and 1001 Things You Should Know on Channel 4. She presented Excess Baggage on Radio 4 untill 2012. She has written more than twenty books including fiction and non-fiction for both adults and children, most recently Valentine Grey, and is a regular columnist for Good Housekeeping magazine and in September 2012 her latest play 'Bully Boy' was the opening production for London's first new theatre in thirty years, the St James. Sandi is the new Chancellor of Portsmouth University.   Author photo © Deej

View All Books By Sandi Toksvig