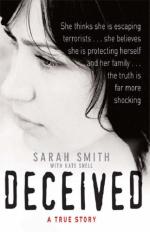 This is not the usual story of an abused childhood but of adults having their lives completely manipulated by an incredibly clever conman. How could someone convince grown, intelligent people that their lives were in such danger they would be on the run for 10 years? Absolutely fascinating and totally engrossing

In 1993 Sarah Smith was a happy and successful student. At her local pub, she met barman Robert Freegard. Peace was shattered when an IRA bomb went off close to her college and in the aftermath of this terrorist attack Freegard revealed his 'true' identity to Sarah and two of her friends - he was an MI5 spy investigating IRA cells in the area. Because of the time they had spent together and their knowledge of his true identity, Sarah, John and Maria were in mortal danger. Freegard convinced the students that they needed to go into hiding or risk being killed.

Thus began a spine-chilling story. For Sarah became a fugitive on the run - living in slums, in cars, sleeping rough in parks, half starved - for ten years. During this time she lived under multiple pseudonyms and worked menial jobs. Freegard became the only person she trusted; he became her lifeline, her saviour and her keeper.

So when, ten years later, police arrived at the house Sarah was cleaning, she could not believe what they were telling her: Freegard was not an MI5 agent, he was a conman and she was one of many victims. He had brainwashed her by using such sophisticated techniques that psychologists are still baffled. He had stolen ten precious years and over 300,000 pounds from Sarah, and in the process ruined her life; from others he had conned even more money. This is Sarah's roller-coaster true story. It is a powerful memoir and a profile of a modern-day criminal genius and master manipulator.

What To Read After Deceived

Over a ten-year period from 1993 Sarah Smith was brainwashed, starved and imprisoned by Robert Freegard. She gave evidence against him at his trial and he was convicted on numerous charges. Sarah continues to rebuild her life.Kate Snell is a writer and film maker, who has written a bestselling biography of Prinicess Diana and directed award-winning documentaries. She manages her own independent television company.