LoveReading View on Boy A

Winner of the Spread the Word : Books to Talk About 2008.

The obvious connection here is between the boys who murdered Jamie Bulger and it is a fascinating topic to cover. How does a child reconcile himself to things he's done in the past and the opportunity's he is now given in a world he has been kept away from for so long? It is a thought provoking book dealing with the highly emotive topic of children killing children now made in to a Channel 4 film.

Jack has spent most of his life in juvenile institutions, to be released with a new name, new job, new life. At 24, he is utterly innocent of the world, yet guilty of a monstrous childhood crime.

To his new friends, he is a good guy with occasional flashes of unexpected violence. To his new girlfriend, he is strangely inexperienced and unreachable. To his case worker, heâ€™s a victim of the system and of media-driven hysteria. And to himself, Jack is on permanent trial: can he really start from scratch, forget the past, become someone else? Is a new name enough? Can Jack ever truly connect with his new friends while hiding a monstrous secret?

This searing and heartfelt novel is a devastating indictment of societyâ€™s inability to reconcile childhood innocence with reality. 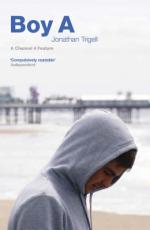 Jonathan Trigell was born in 1974 and has lived in Hertfordshire, Manchester, Derby and Stone. In 2002 he completed an MA in creative writing at Manchester University.  He has been a TV extra, an outdoor pursuits instructor and a door to door salesman; plus has worked right across the winter sports industry, from mopping floors and washing dishes to journalism and organising major events. His first novel, Boy A, won the prestigious John Llewellyn Rhys Prize for best work by an author under 35, and also the Waverton Award, for best first novel of 2004. Jonathan now lives in Chamonix, where he is ...