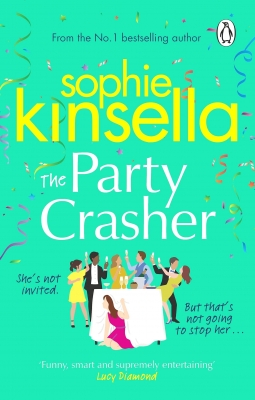 Effie's still not over her parents splitting up a year ago and her dad and his awful new girlfriend are posting photos everywhere (with the hashtags #viagraworks and #sexinyoursixties). Now they're selling the beloved family home and holding a 'house-cooling' party, but Effie hasn't been invited.

Then she remembers her precious Russian dolls, safely tucked away up a chimney, and has no choice but to go back for them. She'll just creep in, grab the dolls and leave. No one will know she was ever there.

But Effie can't find the dolls. And as she secretly clambers around dusty attics, hides under tables and tries (and fails) to avoid bumping into her ex-boyfriend, she discovers unexpected truths about her family - and even about herself.

With time running out, Effie starts to wonder if the only way to find out what's really going on with her family is to simply crash the party...

More About Sophie Kinsella
Add To Wishlist
Buy from our bookstore and 25% of the cover price will be given to a school of your choice to buy more books.

Twice in a Lifetime

Yinka, Where is Your Huzband?