The fourth in the Alfred series and as they progress they just seem to get better. Our hero, Uhtred encounters more battles, politics and mayhem as he continues to struggle with his Saxon birthright and his Viking upbringing. This series is easily as enthralling as Sharpe, the period beautifully realised, the battles as bloody and the adventure as thrilling. I love them.

Our hero, Uhtred, has been made Governor of London. This fourth book in the series will mostly be set in London and will cover Alfred's building of fortified towns to hold Wesssex and his push into Mercia.

‘The characterisation, as ever, is excellent…And one can only admire the little touches that bring the period to life: the bitter weather; the swollen rivers; the soliders gossiping about ale and women…he can also claim to be a true poet of both the horror and the glory of war, showing a feeling for the ways of fighting men which is too often lacking in the politicians who send them into battle.’ Sunday Telegraph

This is typical Cornwell, meticulously researched, massive in scope, brilliant in execution’. News of the World 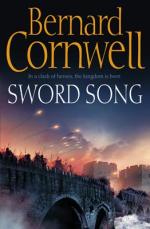