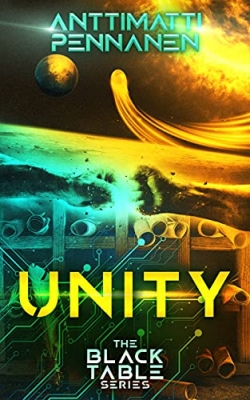 "With plenty of pop culture and science fiction references, and a plot filled with twists and adventure, this is a great addition to the sci-fi series."

‘Unity’ by Anttimatti Pennanen is  the second in The Black Table series and we see the return of fist-bump loving best friends Gus and Jon as their adventure continues. To get the most out of this story I would recommend starting with the first book in the series, Black Table.

After messing with strange alien technology called a Black Table, being catapulted across time and space from Portland Comic Con and coming up against and ancient evil and saving the galaxy, we find Jon, Gus and new friends Uzano and Nova recovering from a blind space jump, a risky but necessary manoeuvre that’s left their ship in need of repair. Events this time take the team to a planet where the communities are plagued by sudden disappearances, and one of the team goes missing, it’s paramount they find out what’s going on.

I’m still waiting to learn more about Gus’ past, but with plenty of pop culture and science fiction references, and a plot filled with twists and adventure, this is a great addition to the sci-fi series and sets up perfectly for us to expect another one.

But who will save Jon and Gus?

After the blind jump, the crew of Unity find themselves lost in space with a broken Black Table, no map, and no allies. And if that’s not enough, they are being hunted by something lurking in the shadows.

With the Light as their guide and science fiction on their side, can Jon and Gus give us a fighting chance?

Anttimatti Pennanen is an indie Author who lives in Finland and Spain. He keeps his readers hooked with humor, cliffhangers, and thrills, leaving an enjoyable experience for all. While drinking an excessive amount of coffee, he is writing stories from his experience as an engineer, green-beret and an athlete, mixing them together with an imagination and a thorough research. The Black Table series is his ?rst science ?ction debut, with the first and second books already out.

Pennanen is also on Instagram:@blacktableseries

More About Anttimatti Pennanen
Add To Wishlist
Buy from our bookstore and 25% of the cover price will be given to a school of your choice to buy more books. 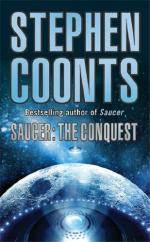 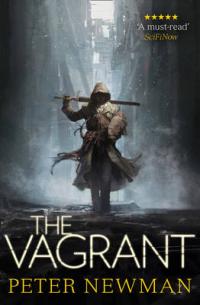