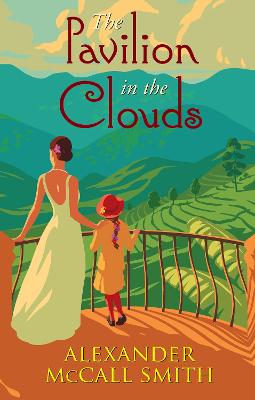 The Pavilion in the Clouds: A new stand-alone novel

"Focused on a Scottish family in 1930s Sri Lanka, this utterly engaging standalone novel shimmers with atmosphere and family tension."

Alexander McCall Smith’s The Pavilion in the Clouds is a stirring, evocative psychological mystery set in 1938 as the British Empire limps through its final days. A Scottish family in Ceylon, as Sir Lanka was then known, live in the Pavilion in the Clouds on their tea plantation. Yet for all the idyllic beauty of their bungalow, the surrounding jungle represents the unknown - snakes might strike at any moment. Indeed, when eight-year-old Bella sets off unpleasant suspicions about her governess, Miss White, her mother, Virginia, comes to believe a snake might live among them.

Virginia’s sense of being an outsider, uncomfortable being in someone else’s country, is palpable. Then there’s the boredom and ennui of having no purpose: “Time was an emptiness. It was a billowing, echoing void… We were just a little rock, hurtling through space, and we were the tiniest things on that rock”. Add to this the paranoia that’s intensified by Bella’s words and deeds, and by a friend Virginia confides in, and we have a tinderbox situation.

The novel is also excellent on relating how children view the world and make sense of adult behaviour - in Virginia’s words, “Children were unpredictable. They accepted so much because they were used to things happening to them, rather than making things happen themselves.” Bella’s relationship with her two dolls - she talks to them, and they offer her advice - is used to great symbolic effect towards the end the novel, years later, when Bella visits Miss White as a young adult to say sorry, now she’s old enough to make things happen herself.

Engaging in a read-in-one-sitting kind of way, Miss White sums up the novel’s most lingering theme when she remarks, “It’s strange isn’t it, how we carry some bits of the past with us for a long, long time – when we don’t really need to.”

The Pavilion in the Clouds: A new stand-alone novel Synopsis

It is 1938 and the final days of the British Empire. In a bungalow high up in the green hills above the plains of Ceylon, under a vast blue sky, live the Ferguson family: Bella, a precocious eight-year-old; her father Henry - owner of Pitlochry, a tea plantation - and her mother Virginia. The story centres around the Pavilion in the Clouds, set in the idyllic grounds carved out of the wilderness. But all is not as serene as it seems. Bella is suspicious of her governess, Miss White's intentions. Her suspicion sparks off her mother's imagination and after an unfortunate series of events, a confrontation is had with Miss White and a gunshot rings off around the hills.

Years later, Bella, now living back in Scotland at university in St Andrews, is faced, once again with her past. Will she at last find out what happened between her Father and Miss White? And will the guilt she has lived with all these years be reconciled by a long over-due apology?

One Night in Winter