‘Maps Full of Borders’ is a literary take on the coming-of age theme. The reader is introduced to Molly, plagued by indecision at the start of a painting. This questioning is expanded to more than her work as Molly’s internal monologue is used as a space for exposition, focusing deeply on a variety of issues from growing old, legacy, gender roles and Molly’s own family history.

Like the borders mentioned in the title, each of the early chapters are neatly categorized to focus on a specific part of Molly’s life, and you, the reader, are kept on the other side of your own border enforced by third-person narration. This distance made it quite difficult for me to get into the story initially and I found I wasn’t particularly endeared towards Molly as I read.

The book is well-written, the concepts and arguments put across by Molly in the book are clear and passionate. From the analytical perspective throughout the book I would hesitate a guess that the author is an artist, or interested in art themselves. They have a keen eye for detail that appears to help them to critique the human condition and find symbols for interpretation in the world around them, and it’s a perspective that adds an extra layer of analysis in the writing.

This is an interesting take on a coming-of-age story, and I think it would be enjoyable for fans of literary fiction.

Fifteen-year-old Molly asks herself if she is a human being or a human doing. She doesn't understand the world around her and feels as though she doesn't belong. By chance, she comes across an old photo album that leads to an unlikely obsession with the boy in the images - a ghost child who allows Molly to express herself more freely than ever before. An alternative take on the coming-of-age novel, 'Maps Full of Borders' centres on questions of identity, gender performance, and cultural expectations. 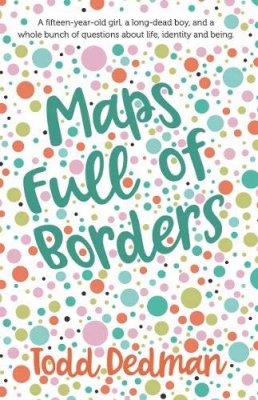 Todd Dedman lives in Kent with his partner and their two daughters. He is a teacher, filmmaker and music obsessive.