LoveReading View on Among Kings

‘Among Kings’ is based around the true story of William Sheppard, an African American missionary and explorer that brought down King Leopold II. Thoroughly researched characters make this adventure story enthralling and, at times, all the more poignant for the truth that provided its foundation.

This is a fascinating story that gave me insight into the history of America and the Congo. Before this book, I was not familiar with the people or events included in this book and I appreciated the additional information and further reading provided at the end of the story. I enjoyed reading the development of the friendship between Sheppard and Samuel Lapsley.

‘Among Kings’ is a poignant reflection on a pivotal moment in history while also allowing for contemplation and reflection on what has changed in the years since. Covering faith, monarchy, unlikely friendships and real-life heroes, this is a great book for history fans.

A black American missionary-explorer risks everything to save a nation, leading to the first international human rights trial.

As a young boy growing up in post-Civil War Virginia, William Sheppard knew he wanted to explore the world. What he never expected was becoming a human rights hero who would change the world forever.

But as a black American missionary, he faced heartbreaking prejudice in pursuing his passion to explore and to serve.

When he finally arrives in the Congo with his unlikely white missionary colleague — Samuel Lapsley — a deep interracial friendship emerges as they face hardships establishing their mission. The two venture deep into the dangerous, Belgian-controlled Congo ruled by the evil King Leopold II. Traveling by steamship 1,000 miles up the Congo River, these two novice missionaries battle lurking pythons, rampant disease, and cannibal tribes.

When tragedy strikes the mission, Sheppard’s sadness drives him in search of adventure to overcome his grief, discover new kingdoms and ultimately, his true self. Against all odds, his discoveries bring him global fame where he is celebrated among kings, queens, and presidents.

Despite his accomplishments, Sheppard longs to return to America to marry his fiancée — Lucy Gantt — a talented musician and teacher. Letters keep their love alive, but Sheppard has to know if the distance has made their love stronger and will she still go to the Congo to serve beside him?

When he returns to America, he’s shocked by new Jim Crow laws, virulent racism, and the rising oppression of black American civil rights. The world has changed, but for Sheppard, his relationship with Lucy and his notoriety has only grown stronger.

Returning to the Congo mission with Lucy, the stakes are raised when Sheppard makes a shocking discovery: Leopold has enslaved the entire Congo for the rubber trade and his own profit. Unbeknownst to the outside world, slavery and oppression has fallen like darkness over the Congo. Millions have perished.

Armed with only a simple camera, the courageous Sheppard knows he has to act.

Risking everything, he captures photos and his images expose Leopold’s atrocities to the world, forcing the first international human rights trial in modern history. Sheppard faces an epic courtroom battle. Millions of lives are at stake.

Who will win? The monarch or the missionary?

Inspired by true events, discover the story of a courageous African American hero whose activism and passion for social justice helped free an enslaved nation. 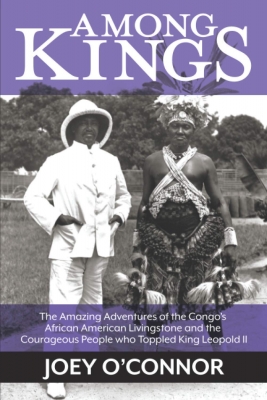 View All Books By Joey O'Connor