Salmon Fishing in the Yemen

LoveReading View on Salmon Fishing in the Yemen

Winner of the Bollinger Everyman Wodehouse Prize for Comic Fiction 2007.
An unusual and delightful debut that all lovers of A Short History of Tractors in Ukrainian will adore. Normally I find novels written in emails, memos, diary entries and the like, such as this is, irritating but this succeeds on all levels. The different strains of the madcap story, reported in different voices, works a treat and as the characters are developed and the plot unfolds, so your interest is held vice-like. Part political satire, part scientific experiment, part spiritual enlightenment and part love story, it is highly accomplished, lightly amusing, unexpectedly touching and very rewarding. I truly loved it. This title is also available as an Audio book in CD format, read by John Sessions, Samantha Bond, Fenella Woolgar and featuring Andrew Marr.

Salmon Fishing in the Yemen Synopsis

This is the story of Dr Alfred Jones, a fisheries scientist - for whom diary - notable events include the acquisition of a new electric toothbrush and getting his article on caddis fly larvae published in 'Trout and Salmon' - who finds himself reluctantly involved in a project to bring salmon fishing to the Highlands of the Yemen - a project that will change his life, and the course of British political history forever.

With a wickedly wonderful cast of characters - including a visionary Sheikh, a weasely spin doctor, Fred's devilish wife and a few thousand transplanted salmon - Salmon Fishing in the Yemen is a novel about hypocrisy and bureaucracy, dreams and deniability, and the transforming power of faith and love.

'[a] wickedly comic first novel about the power of money and the miracle of faith.'
SAGA

'[Salmon Fishing...] captivates the grumpiest reader within moments...if you imagine The Office crossed with Yes, Minister, you may get some inkling of how very funny it is...the intelligence, inventiveness and humanity of this novel in comparison to the usual run of literary fiction is as wild salmon to the farmed.'
Amanda Craig
TELEGRAPH 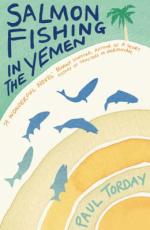 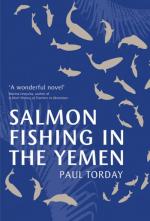 Paul Torday was our Guest Editor in April 2012 - click here - to see the books that inspired his writing.   Paul Torday was born in 1946 and read English Literature at Pembroke College, Oxford. He spent the next 30 years working in engineering and in industry, after which he scaled back his business responsibilities to fulfil a long-harboured ambition - to write. He burst on to the literary scene in 2006 with his first novel, Salmon Fishing in the Yemen, an immediate bestseller that has been sold in 25 countries. Paul Torday died in 2013.

View All Books By Paul Torday