A. A. Milne's first stories about Winnie-the-Pooh, the most famous bear in the world, were published eighty years ago. This beautiful anniversary edition of "Winnie-the-Pooh" celebrates the enduring popularity of Pooh and his Forest friends. Discover what happens when Pooh goes visiting and Piglet meets a Heffalump, not forgetting when Eeyore loses his tail and Pooh finds one! E. H. Shepard's witty and loving illustrations are reproduced in colour to complete this truly delightful gift edition.

'Once upon a time, a very long time ago now, about last Friday, Winnie-the-Pooh lived in a forest all by himself under the name of Sanders' Curl up with a true children's classic by reading A.A. Milne's Winnie-the-Pooh. Winnie-the-Pooh may be a bear of very little brain, but thanks to his friends Piglet, Eeyore and, of course, Christopher Robin, he's never far from an adventure. In this story Pooh gets into a tight place, nearly catches a Woozle and heads off on an `expotition' to the North Pole with the other animals. In this stunning edition of Winnie-the-Pooh, A.A. Milne's world-famous story is once again brought to life by E.H. Shepard's illustrations. Heart-warming and funny, Milne's masterpiece reflects the power of a child's imagination like no other story before or since. Do you own all the classic Pooh titles? Winnie-the-Pooh The House at Pooh Corner When We Were Very Young Now We Are Six Also look out for Return to the Hundred Acre Wood and The Best Bear in all the World A.A. Milne is quite simply one of the most famous children's authors of all time. He created Winnie-the-Pooh and his friends Piglet, Eeyore, Tigger, Kanga and Roo based on the real nursery toys played with by his son, Christopher Robin. And those characters not only became the stars of his classic children's books, Winnie-the-Pooh and The House at Pooh Corner, and his poetry for children, they have also been adapted for film, TV and the stage. Through his writings for Punch magazine, A.A. Milne met E.H. Shepard. Shepard went on to draw the original illustrations to accompany Milne's classics, earning him the name the man who drew Pooh . 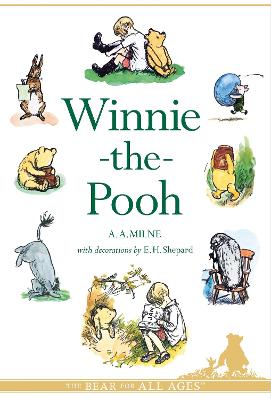 About A. A. Milne

A.A.Milne was born in London in 1882. He began writing as a contributor to Punch magazine, and also wrote plays and poetry. Winnie-the-Pooh made his first appearance in Punch magazine in 1923. Soon after, in 1926, Milne published his first stories about Winnie-the-Pooh, which were an instant success. Since then, Pooh has become a world-famous bear, and Milne's stories have been translated into approximately forty-different languages. E. H. Shepard famously illustrated both 'Winnie-the-Pooh' and 'The Wind in the Willows' though, like A A Milne, much of his career was devoted to work for the satirical magazine Punch. To do the illustrations ...

More About A. A. Milne

More Books By A. A. Milne 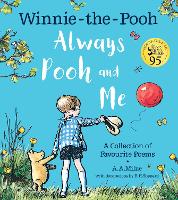 View All Books By A. A. Milne