LoveReading View on The Ancestor

The Ancestor starts off in the middle of the action, I was immediately curious as I was led deeper into the story of Wyatt, his past and how he ended up in the circumstances at the start of the book. As I read I realised that this book has a sci-fi twist that intrigued me further. This book covers two distinct time periods and I like the way that the author uses memory and Wyatt’s diary to flip between the two.

There are a lot of twists and turns in the book, and the plot never quite went where I was expecting, leaving me eager to know what was going to happen next. I found I was kept unawares right until the end of the book, which I enjoyed. The Ancestor places a lot of focus on the characters in this book, slowly developing each one while also fleshing out people from the past. It was really easy for me to picture Laner, with it’s small town feel and it’s sometimes flawed occupants.

I think that the author subtly builds tension throughout the book to make this a really interesting and unique thriller, while also allowing for details of the gold rush and Alaskan history. I think that this book would appeal to a wide range of readers, both historical fiction and crime/thriller fans alike.

A man wakes up in present-day Alaskan wilderness with no idea who he is, nothing on him save an empty journal with the date 1898 and a mirror. He sees another man hunting nearby, astounded that they look exactly alike except for his own beard. After following this other man home, he witnesses a wife and child that brings forth a rush of memories of his own wife and child, except he’s certain they do not exist in modern times—but from his life in the late 1800s.

After recalling his name is Wyatt, he worms his way into his doppelganger Travis Barlow’s life. Memories become unearthed the more time he spends, making him believe that he’d been frozen after coming to Alaska during the Gold Rush and that Travis is his great-great grandson. Wyatt is certain gold still exists in the area and finding it with Travis will ingratiate himself to the family, especially with Travis’s wife Callie, once Wyatt falls in love. This turns into a dangerous obsession affecting the Barlows and everyone in their small town, since Wyatt can’t be tamed until he also discovers the meaning of why he was able to be preserved on ice for over a century.

A meditation on love lost and unfulfilled dreams, The Ancestor is a thrilling page-turner in present day Alaska and a historical adventure about the perilous Gold Rush expeditions where prospectors left behind their lives for the promise of hope and a better future.

The question remains whether it was all worth the sacrifice… 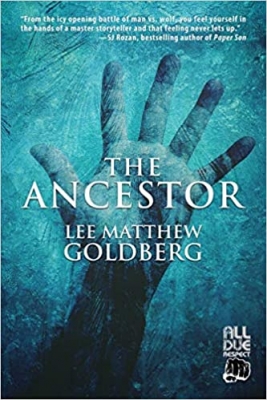