When the body of a Frenchwoman washes up on a wild inlet off the Cornish coast, Brian Macalvie, divisional commander with the Devon-Cornwall police, is called in. With the only visible footprints belonging to the two girls who found her, who could have killed this mysterious tourist?

While Macalvie stands stumped in the Isles of Scilly, Inspector Richard Jury - twenty miles away on Land's End - is at the Old Success pub, sharing a drink with the legendary former CID detective Tom Brownell, a man renowned for solving every case he undertook. Except one.

In the weeks following the unexplained death of the tourist, two other murders are called in to Macalvie and Jury's teams: first, a man is found dead on a Northamptonshire estate, then a cleaner turns up murdered at Exeter Cathedral. When Macalvie and Jury decide to consult Brownell, the retired detective insists that the three murders, though very different in execution, are connected. As the trio set out to solve this puzzle, Jury and Macalvie hope that this doesn't turn out to be Brownell's second ever miss.

Written with Grimes's signature wit, sly plotting, and gloriously offbeat characters, The Old Success is prime fare from 'one of the most fascinating mystery writers today' (Houston Chronicle).

The literary equivalent of a box of Godiva truffles . . . Wonderful. - Los Angeles Times on THE STARGAZEY

Intricate and entertaining . . . A delicious puzzle. - Boston Globe on THE HORSE YOU CAME IN ON

Delicious . . . Jury and his posse are terrific companions . . . Delightful. - Seattle Times on VERTIGO 42

Delightful, surprising, even magical. They begin as police procedurals - someone is murdered, Jury investigates - but Grimes's love of the offbeat, the whimsical and the absurd makes them utterly unlike anyone else's detective novels . . . Although Grimes is American she has a wicked eye for English eccentricity - Washington Post on THE KNOWLEDGE

Read any one [of her novels] and you'll want to read them all. - Chicago Tribune on THE KNOWLEDGE

witty dialogue keeps the action moving to the satisfying conclusion. Series fans and newcomers alike will have fun. - Publishers Weekly

the solution to these apparently separate mysteries proves much simpler than might be imagined - and who better to pave the way to that elusive truth than Ms. Grimes and Richard Jury, her brilliant creation? - Wall Street Journal

Martha Grimes's novels are a hybrid of mystery forms, all of them hugely entertaining. The Old Success is a perfect example. - New York Times Book Review 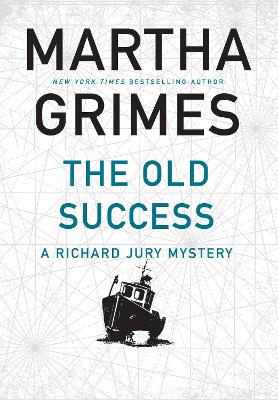 Martha Grimes is the bestselling author of more than thirty books, twenty-four of them featuring Richard Jury. The recipient of the 2012 Mystery Writers of America's Grand Master Award, Grimes lives in Bethesda, Maryland.