What a great story, funny and good read - this was published in 2017 - don't know how this bypassed me.

This is the true story of a British comedian Dominic Holland - I was vaguely aware of this comedian as a stand-up - no idea he is an accomplished author as well. This is a story of a family- two sides of a story - one the comedian and his eldest son (for me although is more famous for playing Spiderman was the fact he was Billy in the West End Stage show Billy Elliot and I was mesmerised by his take on "Electricity")

Father on the tough comedy circuit life can be tough - but don't forget he was voted best newcomer in the 90s at the Edinburgh Fringe Festival and has gone on to be a well-known comedian - whilst his son Tom lands the role of Spiderman whilst his dad is in small theatres and halls.

Written will such admiration and wit this is an author I will be looking out for, and looking to see if he is in a gig in the south-west.

Recommended read and an author I recommend also- I am now seeking out other books.

Hollywood. Los Angeles. Tinsel Town. La La Land. The City of Dreams; groaning with wannabes and a few dazzling stars. How many of us have not dreamt of making it in Hollywood?

For anyone brave enough or foolish enough to make the pilgrimage to LA in search of stardom; keep in mind the very long odds and be sure to bring a box of tissues. Eclipsed is a unique story about an ordinary family. Mum, dad, four boys and a dog, albeit the dad is a somewhat famous UK comedian who dared to dream and chance his arm at becoming a Hollywood screenwriter.

By chance and just like in the best stories, his eldest son is talent spotted and after a series of serendipitous events, now finds himself as Marvel's new Spider-Man. Meanwhile, his dad is doing comedy gigs in village halls and primary schools.

Written with great affection and warmth by a dad as proud as he is bemused, Eclipsed is a hilarious story and insight into family life.We all want the best for our children and we hope that they might eclipse our own achievements? But in the same business as us and before they even hit their teens? Come on, really?

Wow, an interesting and unique idea for a book. Eclipsed has been developed out of unusual circumstances which helped to make this a truly unique read. Full review 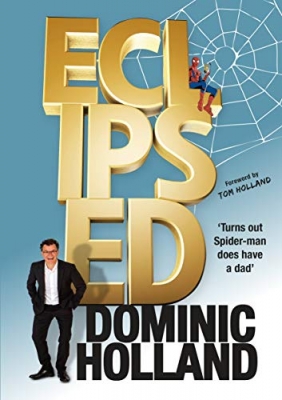 View All Books By Dominic Holland