In the Shadow of Rome

by Joanna B McGarry

LoveReading View on In the Shadow of Rome

In the Shadow of Rome is set in Caledonia (Scotland) and tells the story of the native Caledonians trying to exist within the new occupying Roman empire. As with any tale of colonisation, this is sometimes peaceful, sometimes not.

The conflict between Sigdan, a native of Scandanavia rewarded for his fierceness in battle with a rank, and Vespasian, an incompetent Roman officer adds an interesting dimension of jealousy and power to the story. We also see Sigdan's relationship with Giorsal, an apothecary who lives near the fort and is pregnant with his child. Her talents are sought out by escaped slaves which leads to dramatic consequences. I think that this book is very well-researched. I liked the depth of each of the characters as well as the descriptions of roman life, battles etc. It is a good historical fiction as it creates a picture of the time and place and allows the reader to be drawn into a world that is unfamiliar to them.

I don't know a great deal about the roman empire, I studied it briefly in high school and everything else can be taken from Monty Python or Gladiator, but I was incredibly interested by this entire story. Perhaps because of my lack of knowledge, I also found it interesting that the novel was set outside of Rome, allowing us to consider what life would be like in the empire from a colony's point of view. The time and effort that the author has put into developing their background knowledge is on full display in this book. I think that the author portrays all aspects of this story well and I would definitely recommend it.

In the Shadow of Rome Synopsis

The story takes place in ancient Caledonia, now known as Scotland. The native Caledonians and the occupying forces struggle to co-exist sometimes peacefully, sometimes not. Sigdan, a former sea-wolf from Scatinavia, lives, loves and fights as a Roman auxiliary in a fort on the Antonine Wall. After being captured while fighting against the Romans, he was given his current position in recognition of his savagery in battle. However,Vespasian, an incompetent Roman officer, has perpetuated a longstanding feud between the two men. He frequently pushes Sigdan into conflicts, hoping for retaliation. Vespasian knows he will end up breaking Sigdan, but when is another matter entirely. Meanwhile, Sigdan is preoccupied with Giorsal, a Caledonian apothecary who lives in the settlement that grew up around the fort and who is pregnant with his child. When four abused child slaves of Fabious, a Roman citizen, seek help from Giorsal, she becomes a target. What she does next will change her life – and Sigdan’s life – forever and leads to a dramatic – very Roman outcome in the arena. 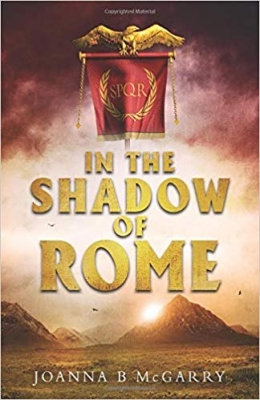 About Joanna B McGarry

More About Joanna B McGarry