Marie Colvin was glamorous, hard-drinking, braver than the boys, with a troubled and rackety personal life. She reported from the most dangerous places in the world and her anecdotes about encounters with figures like Colonel Gaddafi and Yasser Arafat were incomparable. She was much admired, and as famous for her wild parties as for the extraordinary lengths to which she went to tell the story.

Fellow foreign correspondent Lindsey Hilsum draws on unpublished diaries and interviews with friends, family and colleagues to produce a story of one of the most daring and inspirational women of our times.

An extraordinary account of one reporter's fearless and ultimately fatal dedication... Hilsum draws an empathetic portrait of a woman whose courage often crossed into recklessness, both in combat zones and outside them... Now, thanks to Hilsum's deeply reported and passionately written book, Colvin has the full accounting that she deserves -- Joshua Hammer - New York Times

Writing a biography of Marie Colvin is like capturing lightning in a bottle, but Lindsey Hilsum has the knowledge and personal experience to help us understand what drew Colvin to rush towards the eye of the storm at such great risk. It is a superbly fitting tribute -- Annie Lennox

Hilsum marshals not just empathy for her subject, who was also a friend, but investigative and critical skills and damn fine storytelling... Hilsum's understanding of the background to each conflict, and the reality of life as a correspondent in the field, is one of the great strengths of the book... In Extremis rescues Marie Colvin from the rubble of Baba Amr, and brings her tragically, and tenderly, to life - Irish Times

Superb. A fitting account of the life of one of the finest war correspondents of our time, written by another. I admired Marie greatly, and In Extremis showed me I was right to do so -- John Simpson

The clearest and most rounded picture...emerges from Hilsum's book. Colvin herself, courageous and often tortured, rises again from its pages -- Emma Graham-Harrison - Observer

One of the modern world's most experienced and admired foreign correspondents, Lindsey Hilsum, has now written a riveting, intimate and deeply moving account of the epic life of her late friend and colleague, Marie Colvin, who will be long remembered - not least because of Hilsum's fine work in this book - as amongst the great war reporters of her generation -- Jon Lee Anderson

An inspiring and intimate biography of one of the bravest journalists of our time by one of her finest colleagues. Lindsey Hilsum takes us inside the world of a woman who changed the world around her -- Lyse Doucet 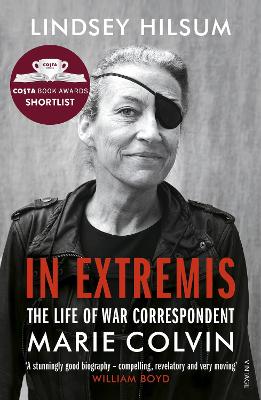 Lindsey Hilsum is Channel 4 News International Editor. She has covered many of the conflicts of recent years, including Syria, Ukraine and the Arab Spring - sometimes alongside Marie Colvin. In 1994, she was the only English-speaking foreign correspondent in Rwanda when the genocide began. She was in Belgrade for the 1999 NATO bombing of Serbia, and in Baghdad for the 2003 US invasion of Iraq. She has won awards from the Royal Television Society and BAFTA amongst others, and was the recipient of the 2017 Patron's Medal from the Royal Geographical Society. Her last book Sandstorm: Libya from Gadaffi to Revolution was described by ...

View All Books By Lindsey Hilsum