How Beautiful They Were

LoveReading View on How Beautiful They Were

Wow. This is an amazing tale packed with drama on and off the stage. a circular tale of Colonel Tearwood's American Theatre Company. A plot filled with love, loss, anger, jealousy and drama, that I don't think I can sing the praises of enough! How Beautiful They Were is incredibly well-written and drew me in from Jeremiah's introduction to the spectacular candlelit finale. It reminded me quite a lot of The Phantom of the Opera - the idea that life reflects art with secrets, betrayals and deaths happening in the world around the theatre. I thought the setting in 1850s America and the side story / undertone of racism was poignant and very well handled. I've loved following the story of John James Beaufort, my heart broke along with his in the early stages and I was fascinated to see what would become of him on his voyage to America. The adaptations of notable works into plays that reflected their life and surroundings in America and as a way to expose crimes and tell each character's stories was marvellous and when Wuthering Heights was mentioned I couldn't wait to see how it was interpreted. La piece bien faite indeed!

How Beautiful They Were Synopsis

How Beautiful They Were is an epic tale that begins in the London theatre district and then moves to the bustling New York theatre scene of the 1850s, with all its trademark insanities.

It's America in all its beauty and excitement, its rise and fall of personalities, its joys and desperations, selfish corruptions and violence. Even its hatred and racism. Enter Colonel Tearwood's American Theatre Company. Helmed by actor Nathanial Luck and playwright Robert Harrison, it revolutionizes the theatre of the times by bringing daily life to the stage: Love affairs, social corruption, political intrigue, violence and death grip the audience as backstage the players' fortunes rise and fall and rise again in an all too human play.

There's dashing Nathaniel Luck, hunted for the Pickwick Paper murders; beautiful Genevieve Wells, a con artist and swindler; Rosina Swain, aspiring actress in search of a father; and Robert Harrison, scion of a wealthy family, who was burned and disfigured in the infamous Wall Street fire, and turns the ruins of his body into art.

How beautiful they were... 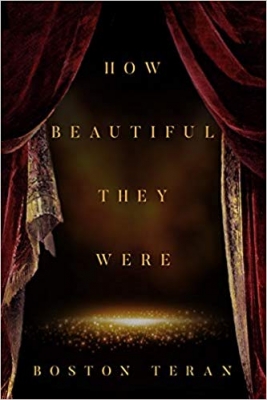