Part of the The Holly Wakefield Thrillers Series

Holly Wakefield works for the NHS as a criminal psychologist specialising in serial killers. She has particular reason to be good at her job - but she keeps that to herself.

When DI Bishop from the Met Police approaches Holly to investigate a recent killing, Holly is horrified by the dismembered bodies and the way they have been theatrically positioned. More shocking still is when the pathologist reveals this is not the first time she has seen these mutilations. It means a serial killer is out there, and they're going to kill again - soon.

Holly is used to chasing serial killers. But this killer has something in common with Holly that she's kept hidden for as long as she can remember. And for the first time since she was a child, Holly is forced to face the darkness of her past...

The first book in a bestselling new serial killer series. For fans of Patricia Cornwell, Val McDermid, Robert Galbraith and the TV's Luther and Line of Duty.

Meticulously plotted and devious in its execution, Mark Griffin's debut novel is utterly compelling. I can't wait to read the rest of the Holly Wakefield series -- Lesley Kara, bestselling author of The Rumour Wow.

I read this in less than a day. As many twists and turns as a rollercoaster! A fascinating lead character with a deliciously dark secret. It's the kind of writing which grabs you and won't let you go -- Amy Lloyd, bestselling author of The Innocent Wife 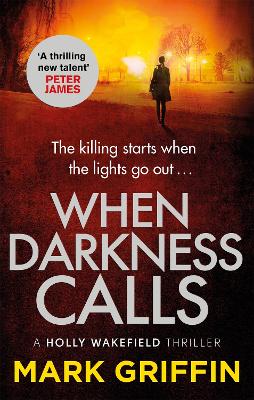 Mark Griffin began his writing career when he was a teenager, with three successive years of gold medal awards in the Hampshire Writing Festival. In 1996 he moved to Los Angeles, where he turned his attention to acting, script writing and development. After returning to England, Mark continued in this profession, and in April 2017 was shortlisted in the top five out of 3500 entrants in a national crime thriller writing competition sponsored by Random House Publishing and the Daily Mail for his debut, When Darkness Calls. When Darkness Calls is the first book in his crime thriller series starring criminal psychologist Holly ...

View All Books By Mark Griffin