The Colour of the Day

LoveReading View on The Colour of the Day

This is one of the best books that I have read in a long time.  For sci-fi, thriller, adventure, futuristic the list of genres that can be applied to this novel is first class.  It is similar in style to George Orwell's '1984', only this novel is more terrifying for those living in forty year's time in 2059.

More aspects of the United Kingdom's citizens' lives are under Government control and society as we know it today is falling dangerously apart.  The storyline follows the life of one such citizen, Toli, of the mishaps that befall her, how to deal with these with what little resources she has whist living in a soon to be dystopian society where friendship and family have all but disappeared, with survival of the fittest being the norm status of society.

The black side of society is always present, always with her and the author's descriptive style of writing leaves the reader very glad that he/she is living at the present time and not in the future where life is cheap, death is common and anything goes.  The storyline is excellent giving the reader the feeling of actually being part of the story, and book itself, apart from being a constant page turner from beginning to end, sets itself apart from similar books in that the book itself should be read in order to fully appreciate the story as it unfolds.

If you only buy one book or read one book this year, then this is definitely the one to go for as it is a gripping definitely must read book.

The Colour of the Day Synopsis

As old economies collapse and new ones rise, the tide of 21st century immigration has turned, bringing an influx from the once prosperous West. Tolerance, an impoverished widowed mother of two, believes she must do anything to survive, including escaping her birthplace; a once genteel city now shrouded by a seething, perilous shanty town. However, in an unpredictable society where age-old predators seize the vulnerable, home and friendship might be all anyone has. 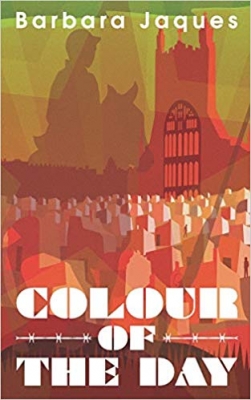 "I’m the author of reading group fiction and short stories. I also write a social-satire series, inspired by my time living as an expat in Singapore. The Cult of Following is the opening trilogy for it, and a fourth book in the series, Flashbulb, will be published later this year. In England now, I write the sort of novel I prefer to read: something to get me thinking with the occasional slice of dark humour and sprinkling of tears. Influenced by life's what-ifs? I hope that sometimes I might succeed in inspiring the same question in others. Aside ...

View All Books By Barbara Jaques