LoveReading View on The Wicked Deep

An ancient curse haunts a contemporary town, with a seventeen-year-old heroine at the very heart of its darkness.

Two centuries ago, three sisters accused of witchcraft were drowned as punishment for their alleged sorcery. And every year, the sisters rise from the waters to inhabit the bodies of three local girls, set on seducing and drowning boys in revenge. This annual act of vengeance has become something of a macabre tourist attraction, with hundreds of visitors descending on the insular town of Sparrow ahead of the sisters’ return. 18 year-old Bo is among them this year, but he’s not Sparrow’s usual kind of tourist, as Penny discovers. But then Penny’s not your usual kind of local, either. She’s an outsider who lives with her grief-stricken, fortuneteller mom on an island off Sparrow. When Bo and Penny’s lives collide on the night the sisters rise from the depths, a thrillingly lyrical tale unfolds and crashes to a pulse-quickening crescendo as an age-old tempest of emotional turmoil plays out against the wild winds of a Pacific storm.

Weaving folkloric elements into a contemporary setting is no easy feat, and here this has been accomplished with panache - the writing is as beguiling as the Swan sisters themselves and makes for an exhilarating devour-in-one-sitting reading experience.

Hocus Pocus and Practical Magic meets the Salem Witch trials in this haunting story about three sisters on a quest for revenge - and how love may be the only thing powerful enough to stop them.

Welcome to the cursed town of Sparrow... Two centuries ago, in the small, isolated town, three sisters were sentenced to death for witchery. Stones were tied to their ankles and they were drowned in the deep waters surrounding the town. Now, for a brief time each summer, the sisters return from the depths, stealing the bodies of three weak-hearted girls so that they may seek their revenge, luring boys into the harbor and pulling them down to their watery deaths. Like many locals, seventeen-year-old Penny Talbot has accepted the fate of the town. But this year, on the eve of the sisters' return, a boy named Bo Carter arrives; unaware of the danger he has just stumbled into or the fact that his arrival will change everything... Mistrust and lies spread quickly through the salty, rain-soaked streets. The townspeople turn against one another. Penny and Bo suspect each other of hiding secrets. And death comes swiftly to those who cannot resist the call of the sisters. But only Penny sees what others cannot. And she will be forced to choose: save Bo, or save herself.

In addition to our Lovereading expert opinion some of our Lovereading4kids Teen/YA Reader Review Panel members were also lucky enough to read and review this title. You can read their full reviews by clicking here. 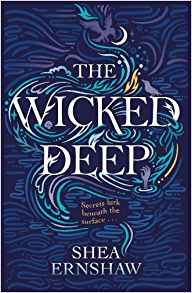 Shea Ernshaw under the pseudonym Shea Olsen, is the coauthor of the upcoming Flower with Elizabeth Craft. She is also the author of The Wicked Deep. Shea lives and writes in a small mountain town in Oregon. She works as a producer for a film production company and shares a home with her husband, a dog named Diesel, and two cats.