February 2018 Debut of the Month  |  In a Nutshell: All people have bubbles

You’ll smile, you’ll gasp, you’ll root for main character Martin throughout and, while it’s only January, I strongly suspect that this radiant story about relishing memorable moments and making sense of the world will remain one of my Books of the Year.

This exquisitely insightful, charming tale is all about the unforgettable voice of 16 year-old Proust-obsessed Martin, who’s in France where his mom is directing a movie. He has Asperger’s and struggles with personal pronouns. “Until I was eight years old, I called myself “you” because that's what everyone else called me, and I called other people "I" because that's what they called themselves", he explains. Like his favoured Proust protagonist, Martin lives through memories and through his devotion to fine detail - of taste, smells, landscape and faces. So, when he meets and falls for Alice, he views her as an incarnation of his favourite Proust heroine. While Martin’s relationships with Alice and the other new kids he encounters are far from straightforward, he moves beyond his Proustian absorption in things past and enriches the lives of many others as his own world expands. As one character realises with wry affection, Martin is “truly cool for a robot”.  ~ Joanne Owen

Kids Like Us is the delightful, heartwarming story of Martin, a teenager on the autism spectrum, who falls for Gilberte-Alice, a ‘normal’ French girl. While spending summer in the French countryside with his mother, Martin mistakes Gilberte for a character in a novel he is obsessed with—Marcel Proust’s masterpiece In Search of Lost Time. He gradually realises she is not Gilberte, the fantasy girl, but a real person named Alice. Falling in love, in all its unpredictability, teaches Martin that he can in fact connect, can get out of his bubble.

Offering a valuable window into the mind of a high-functioning autistic kid, Kids Like Us is also the ultimate book about acceptance. Perhaps we are all in our own bubble; perhaps the line between reality and imagination does not have to be fixed. We meet Martin’s adorable older sister, Elisabeth, his friend Layla and her very useful ‘moth’ theory. And there’s lots of great cooking. The prose is sharp, original and brimming with empathy and humour. For those who loved The Curious Incident of the Dog at the Nighttime, and Counting by 7's by Holly Goldberg Sloan.

"There has never been a romantic hero like Martin, but there has also never been a living, breathing, heart-breaking teen not like him. Whether tender and familiar or brilliant and disorienting, Kids Like Us weaves together a truly atypical love story—from pound cake and Proust, from autism and family dysfunction—but always with the rare, luminous humanity that makes a true teen anthem, another Fault in our Stars.” — Melissa de la Cruz, NYT bestselling author of Blue Bloods and Witches of East End

"The most original voice since The Curious Incident of the Dog in the Nighttime tells the most radiantly human love story since Eleanor and Park. Reyl's extraordinary YA debut isn’t just a book you read; this is one of those rare books that reaches in deep and writes you back."  — Margaret Stohl, co-author of #1 NYT and international bestseller Beautiful Creatures

"Kids Like Us is a song in which, like life, both harmony and dissonance play their part. The writing is beautiful; the setting lush and evocative. I didn't want to leave Martin's world." --Ally Condie, #1 NYT bestselling author of Matched and Summerlost 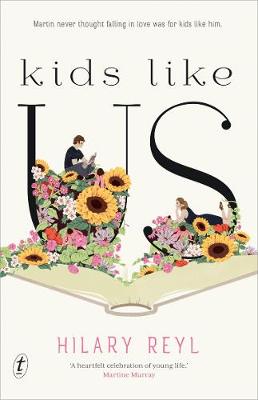 Hilary Reyl has a PhD in French literature from NYU with a focus on the nineteenth century, and has spent several years working and studying in France. She lives in New York City with her family. This is her first novel.

View All Books By Hilary Reyl