A chilling ghostly tale set in 1935 on Kangchenjunga in the Himalayas. Five men attempt to climb to the summit of the worlds third highest mountain, they take the same path as a failed climb in 1907 and soon find local superstitions and eerie sightings affect their thoughts and nerves. Michelle Paver embeds a sense of complete reality, Dr Stephen Pearce tells the story and it feels as though it could be a documented historic account. Yet as I read, small unnerving suggestions began to affect my reasoning. Thoughts and feelings, trapped and hemmed in by fear, transferred from the pages. Michelle Paver explains at the end of the book that in reality, the actual peak of the mountain remained untouched until 1980, so as not to upset ‘whatever’ lived up there. Was the altitude affecting the climb in the novel, or a more supernatural presence? ‘Thin Air’, set in a world unknown to most, is an unsettling, gripping, and oh so readable tale.   ~ liz Robinson

The Himalayas, 1935.Kangchenjunga. The sacred mountain. Biggest killer of them all.Five Englishmen set out to conquer it. But courage can only take them so far. And the higher they climb, the darker it gets.

Paver is superb at describing the Himalayan landscape...This is a finely wrought example of the classic, Jamesian ghost story...made extra special and disturbing by the bleak, wintery setting. -- Peter Tennant * BLACK STATIC

Michelle Paver is one of my favourite writers at the moment...Terrify your loved ones this Christmas with some of Paver's best * STARBURST

Paver constructs her narrative expertly. The human drama is engaging, while the scares are unfurled slowly but surely, to chilling effect. * CATHOLIC HERALD

This book is guaranteed to give you chills! Don't read it just before going to bed... * MARTIN BELCHER blog

This one is a cracker * DAILY TELEGRAPH

Terror on a grander scale -- Andrew Michael Hurley * THE GUARDIAN *

The book transports the reader into cold, inimical terrain, forcing them to question the evidence of their over-stimulated senses * METRO

Paver's elegantly crafted ghost story holds you in a vice-tight grip until the end...Thin Air is an edge-of-your-seat reading experience that will leave your frosty-fingered and shivering as you hurriedly leaf through its pages to reach its startling climax -- Katherine McLaughlin * SCI FI NOW

After finding herself mesmerised by the history, vastness and the terrifying solitude of the Himalayas, Michelle Paver uses it as the setting for this undeniably gripping account of a 1935 expedition up Kangchenjunga...Step in with excitement, yet the greatest of caution... * ABERDEEN PRESS & JOURNAL *

This is a slim book, and a simple story, but it has all the elegance of a classic ghost story -- Miriam McDonald * SFX *

I cannot recommend this book enough. If you enjoyed Michelle's previous ghost story, Dark Matter, you'll love this one. If you love anything supernatural, a bit scary, ghostly, then you'll enjoy it too. It's a fantastic read thats absorbing and totally paralysing. Beautifully, lyrically written. A five star read if ever there was one! * EMPIRE OF BOOKS *

If you've read Michelle Paver's previous ghost story Dark Matter, you'll know how well she can build a creepy, unsettling atmosphere - and she's done it again here, in a very different environment. I for one couldn't put the story down but needed to read on to the final resolution before trying to sleep! * OUR BOOK REVIEWS ON LINE *

The first thing that impressed me was the sustained recreation of the 1930s: male camaraderie and old pals. It is linguistically perfect, since you completely believe in the characters and hte mindsets of this group of climbers. The research is thorough and the descriptions so rich that you can imagine every step on the ice and rocks and every nuance of creating the base camps and additional camps during the ascent. * NUDGE *

If you have ever wanted to climb a mountain or to have some sort of insight into the preparation both mentally and physically, of the extreme effort it takes to even attempt something like this, then this is the book for you. * THE BOOK TRAIL *

And my enjoyment and shiver mounted with the appearance of the terrifying object, deployed so brilliantly in one of the best and most shivery 'ghosts I have ever read- W.W. Jacobs, The Monkey's Paw.

Paver has an object, and I whimpered anxiously as it brought the added accretion of my memory of Jacobs' story into the room. * LADY FANCIFULL *

This book was both a fantastic description of the majesty of the Himalayas and a wonderfully creepy ghost story. In equal measures it showed why some are irresistibly drawn to these mountains and why, possibly, they shouldn't be. This would be a great read for Halloween (but make sure you know exactly where you left your rucksack...)  JANE & BEX BOOK BLOG

While comparable to Dark Matter, this is I think very much the better book - in a way which I can't explain in detail, the ecology of its horror is much more complete: while lacking none of the horror of the other book, it is all more satisfying.   BLUE BOOK BALLOON

It is rich in atmosphere, the environment stunningly described. Kangchenjunga is a formidable character in its own right and it is a deadly one. but it is also such a satisfying ghost story, so perfect for these darker evenings, and it is wrapped within a beautifully told and sad tale. Thin Air succeeds as an excellent ghost story and horror novel but it is also a wonderful piece of historical fiction and I thoroughly recommend it.   FOR WINTER NIGHTS blog

I loved her previous ghost/terror novel, Dark Matter. This is similar, the tension tightens slowly, with the turn of every page, until you cannot put the book down.   SANDRA DANBY BLOG

Thin Air is a wonderfully evocative and creepy story but it's more than that - it's a capturing of the awe of nature, the exhilaration of climbing and of a time during British colonialism which combined some noble endeavours but also an awful lot of ignoble behaviour. Of course, of course, of course, I recommend Thin Air to you.   THE BOOK BAG

The scariest part of the story for me was the bit with the rucksack. I think the hair on the back of my neck stood up. Very macabre and creepy   THE BOOK REST

There's just something about the bleakness, the sheer depth of the isolation and the unfamiliarity of this terrain to me that I love in this book. Put that alongside the fact that it's a mix of psychological thriller and ghost story , and you've got a winner.   REBEL ANGEL blog

A ghost story to chill and thrill...Like Touching the Void rewritten by Jack London, Thin Air is a heart-freezing masterpiece. -- Amanda Craig   THE OBSERVER

Paver's descriptions of the isolated and intimidating landscape create an eerie, unsettling atmosphere that gets under your skin   DAILY EXPRESS

This haunting new novel and long-awaited sequel to the chilling Dark Matter certainly doesn't disappoint. The plot of Thin Air is undeniably gripping and a genuine page-turner. After finding herself mesmerised by the history, vastness and the terrifying solitude of the Himalayas, Paver used it as the setting for this undeniably gripping account of a 1935 expedition up Kangchenjunga. -- Kate Whiting  GLASGOW HERALD

Chilling in every sense -- Violet Hudson  MAIL ON SUNDAY

There are no obvious shocks here but instead a sustained creeping dread as the likelihood increases that it's not all in Pearce's mind and that they are heading for tragedy just like Lyell and company. Subtitled 'A Ghost Story', this is very much the classic approach, concentrating on mood and subtllety to create chills in the reader. -- James Evans  STARBURST

This vivid ghost story reads like a classic  SUNDAY MIRROR

Looking for a proper ghost story? Thin Air is a creepy, compelling tale of a Himalayan climbing expedition, where strange events on the mountain stir dread and panic.  GOOD HOUSEKEEPING 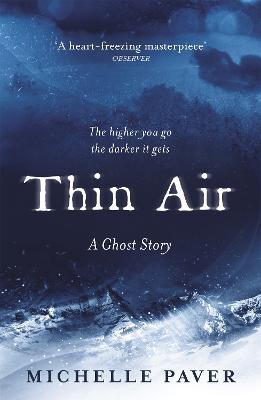 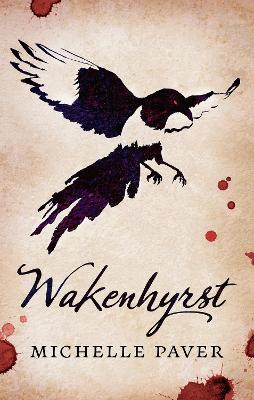