September 2017 Book of the Month

A challenging, literary read of two very different narratives seemingly only linked by geography for both start their strange journeys from the Tel Aviv Hilton.  That seems to be their only real connection.  One story involves a rich American who decides to give away his treasures and walk into the desert in Israel and disappear.  The other story involves an author who has writer’s block and is persuaded by a professor of literature to write about the end of Kafka’s life, only this is his second life, his “after life” where he faked his death and escaped to Israel.  Both stories contain a certain amount of drama and incident but mostly they are ramblings of philosophy and steams of consciousness.  Dense and demanding, you need to read this slowly with lots of breaks to digest the mass of intellectual debate.  ~ Sarah Broadhurst

Jules Epstein has vanished from the world. He leaves no trace but a rundown flat patrolled by a solitary cockroach, and a monogrammed briefcase abandoned in the desert. To Epstein's mystified family, the disappearance of a man whose drive and avidity have been a force to be reckoned with for sixty-eight years marks the conclusion of a gradual fading. This transformation began in the wake of Epstein's parents' deaths, and continued with his divorce after more than thirty-five years of marriage, his retirement from a New York legal firm, and the rapid shedding of possessions he'd spent a lifetime accumulating. With the last of his wealth and a nebulous plan, he departs for the Tel Aviv Hilton. Meanwhile, a novelist leaves her husband and children behind in Brooklyn and checks into the same hotel, hoping that the view of the pool she used to swim in on childhood holidays will unlock her writer's block. But when a man claiming to be a retired professor of literature recruits her for a project involving Kafka, she is drawn into a mystery that will take her on a metaphysical journey and change her in ways she could never have imagined. Bursting with life and humour, this is a profound, mesmerising, achingly beautiful novel of metamorphosis and self-realisation - of looking beyond all that is visible towards the infinite.

A brilliant novel. I am full of admiration -- Philip Roth

... strides into the forecourt of American letters -- Susan Sontag

Nicole Krauss is the author of the international bestseller The History of Love, which was published by Penguin in 2005. It won the William Saroyan International Prize for Writing, France’s Prix du Meilleur Livre Etranger, and was short-listed for the Orange, Médicis, and Femina prizes. Her fiction has been published in The New Yorker, Harper’s, Esquire, and Best American Short Stories, and her books have been translated into more than thirty-fivelanguages. She lives in Brooklyn, New York. 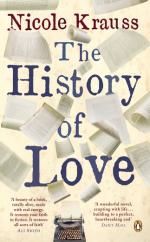 View All Books By Nicole Krauss