This third Rebus omnibus comprises books seven, eight and nine in the Rebus series: Let it Bleed, Black & Blue and The Hanging Garden.

Let it Bleed: Rebus finds himself sucked into an investigation that throws up more questions than answers. Was the Lord Provost's daughter kidnapped or just another runaway? And why on earth is Rebus invited to a clay pigeon shoot at the home of the Scottish Office's Permanent Secretary? Drawn into the machine that is modern Scotland, Rebus confronts the fact that some of his enemies may be beyond justice.

Black & Blue: Rebus is juggling four cases trying to nail one killer - and doing it under the scrutiny of an internal inquiry led by a man he's just accused of taking backhanders from Glasgow's Mr Big. Added to that there are TV cameras at his back investigating a miscarriage of justice, making Rebus a criminal in the eyes of millions of viewers. Just one mistake is likely to mean a slow and unpleasant death or, worse still, losing his job.

The Hanging Garden: DI John Rebus is on the trail of a WWII war criminal - until the running battle between two rival gangs on the city streets arrives at his door. When his daughter is the victim of a hit-and-run Rebus is forced to acknowledge that there is nothing he wouldn't do to bring down the prime suspect - even if it means cutting a deal with the devil. 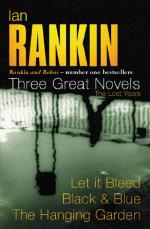