Based on a True Story

LoveReading View on Based on a True Story

With shades of Ingmar Bergman's film Persona and the 1992 Bridget Fonda and Jennifer Jason Leigh movie Single White Female, this dizzying tale of female rivalry and ambiguous love from award-winning French author De Vigan is wonderfully unsettling. The main, seemingly autobiographical character, appears to be De Vigan herself, an author struggling badly with her writing who finds her life invaded by another woman whose friendship is once welcomed and then becomes increasingly involving and perilous and soon threatens not just her life but her belief in herself as a writer. Ingenious, disturbing, creepy, this tale of transference and rivalry feels at times like a contemporary ghost story, albeit in a postmodern way but never slows down and makes for a fast, involving read. Fascinating and unputdownable. ~ Maxim Jakubowski

Based on a True Story Synopsis

What would you do if your closest friend tried to steal your life? A chilling new novel from the prize-winning author of No & Me - a Richard & Judy Bookclub selection Today I know that L. is the sole reason for my powerlessness. And that the two years that we were friends almost made me stop writing for ever. Overwhelmed by the huge success of her latest novel, exhausted and unable to begin writing her next book, Delphine meets L. L. is the kind of impeccable, sophisticated woman who fascinates Delphine; a woman with smooth hair and perfectly filed nails, and a gift for saying the right thing. Delphine finds herself irresistibly drawn to her, their friendship growing as their meetings, notes and texts increase. But as L. begins to dress like Delphine, and, in the face of Delphine's crippling inability to write, L. even offers to answer her emails, and their relationship rapidly intensifies. L. becomes more and more involved in Delphine's life until she patiently takes control and turns it upside down: slowly, surely, insidiously. Based on a True Story is a chilling novel of suspense that will leave you questioning the truth and its significance long after you have turned the final page.

Based on a True Story Press Reviews

'A wonderful literary trompe l'ceil: a book about friendship, writing and the boundary between reality and fantasy ... Dark, smart, strange, compelling' Harriet Lane, bestselling author of Her

'This is an addictive read. Clever, compulsive and deft. De Vigan kept me guessing to the point where I even began to question the reality of the pages in my hand. Fantastic' Ann Morgan, author of Beside Myself

'A story that keeps the reader guessing until - and beyond - the very end ... A story of memory and friendship, a cracking page-turner and a journey into what the essence of fiction, and indeed autobiography, might be. Excellent' Nicholas Searle, author of The Good Liar, shortlisted for the 2016 CWA New Blood Dagger

'An incredible true story of obsessive female friendship that grips until the very last mark on the very last page' Denise Mina, bestselling author of the Alex Morrow series

'In this captivating story of imprisonment ... Delphine de Vigan intelligently questions the place of the writer in our society of imitation' Le Figaro 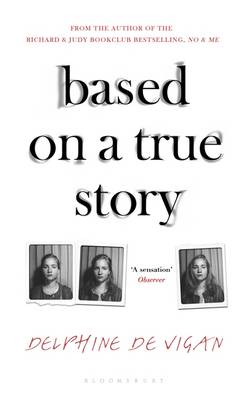 Delphine de Vigan is the author of several novels, including Jolis Garcons, Soir de decembre and Les heures souterraines. No and Me is her first novel to be published in English; it was a bestseller in France (100,000), where it was awarded the Prix des Libraires (The Booksellers' Prize) in 2008, and also a bestseller in Italy (50,000).George Miller is a regular translator for Le Monde diplomatique's English-language edition. He is also the translator of Conversations with my Gardener by Henri Cueco and Inside Al-Qaeda by Mohammed Sifaoui. Author photo © Delphine Jouandeau