LoveReading View on An Unlikely Agent

London, 1905, and Margaret Trant is living a humdrum live until she sees an interest-piquing advertisement for a secretarial position. “Was it really possible that my life could change?” she wonders in response to the ad’s offer of wild new horizons, and she grasps the opportunity with both elegantly-gloved hands. Immediately thrilled by the secrecy surrounding her new employer, an organisation enigmatically known as “Bureau 8”, sharp-minded Margaret discovers that she’s actually working for a secret government intelligence department, and soon finds herself embroiled in their mission to thwart a group of anarchists.

I adored Margaret’s resourcefulness and the novel’s period charm, from the “boyish gallantry” of her new colleagues, to the evocations of Edwardian London. Fuelled by the heroine’s immense appeal, and the flawless plotting, this is an engrossing read, with many funny moments, and I rather hope this gifted debut novelist dishes up more detective delights in the very near future. ~ Joanne Owen

Click here to read a Q&A with Jane Menczer.

London, 1905. Margaret Trant lives with her ailing, irascible mother in a dreary boarding house in St John's Wood. The pair have fallen on hard times, with only Margaret's meagre salary from a ramshackle import-export company keeping them afloat.When a stranger on the tram hands her a newspaper open at the recruitment page, Margaret spots an advertisement that promises to 'open new horizons beyond your wildest dreams!'. After a gruelling interview, she finds herself in a new position as a secretary in a dingy backstreet shop.But all is not as it seems; she is in fact working for a highly secret branch of the intelligence service, Bureau 8, whose mission is to track down and neutralise a ruthless band of anarchists known as the Scorpions. Margaret's guilty love of detective fiction scarcely prepares her for the reality of true criminality, and her journey of self-discovery forms the heart of this remarkable novel, as she discovers in herself resourcefulness, courage, independence and the first stirrings of love. 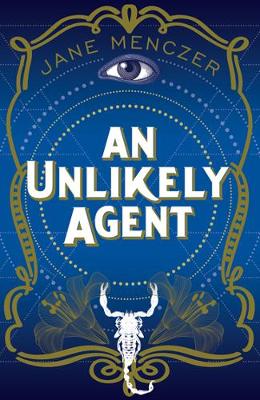 Jane Menczer was born in Winchester and now lives in Cambridge. She has worked in a West End theatre, as a nanny, as a waitress, and as a bookseller. Working with Germaine Greer on her dissertation awakened an interest in all the talented and heroic woman from other eras who have been overlooked or forgotten, and directly influenced the creation of the character of Miss Trant. Jane currently teaches drama at a comprehensive school near Cambridge. An Unlikely Agent is her first novel. Click here to read a Q&A with this author.