This haunting re-telling of the Selkie legend begins on a night when “moonlight silvered everything, casting doubt and shadow”, and a young fisherman, Donald, sees a pod of seals transform into “young women, lithe and graceful”. When they notice him, all but one of the mysterious sisters return to the sea. Now alone, Donald subjects her to a terrible act of violence. “They were maidens, ready for mating,” his mother explains when he brings her home. “You’ve made your bed, and now you must lie in it”. Pregnant with his child, Maihri (as they name her) and Donald are duly married, but convincing the hostile, fearful villagers to accept her otherworldliness is no easy task.

While Mairhi shows herself to be brave, bold and able to defend herself, and while Donald is gentle, kind and desperate to atone his wrongdoing, Mairhi’s silent entrapment in a world that is not hers gives this richly eloquent reinterpretation an eerily tragic edge that lingers long after the last page has been turned. Fans of folktale retellings and magic realism will surely welcome this addition to their collections. ~ Joanne Owen

'A good proportion of my list falls into the crime/thriller genre, but what defines every book I publish, regardless of its ‘category’, is excellent writing. When I was sent Su Bristow’s Sealskin, I was, quite simply, blown away. With exquisite grace, mesmerising descriptions and insights, and some of the most entrancing, beautiful prose I have ever read, Su retells the legend of the selkies, bringing it into the modern day and examining its multifold layers. At the heart of this story is a shocking act of violence, and yet Su manages to create a deep and powerful love story from the horror, to provide redemption for her characters, to express the real meaning of healing, forgiveness, community and family. It is a book that you will cherish, with passages you will underline. You will be breathless as you read it, and reach for the tissues when the final, heartbreaking scenes are played out. You will remember this book. Sealskin really is that good, and Su Bristow is undoubtedly one of the most talented authors of our generation.' ~ Karen Sullivan, Orenda Books

Click here to read a Q&A with Su Bristow.

What happens when magic collides with reality?Donald is a young fisherman, eking out a lonely living on the west coast of Scotland. One night he witnesses something miraculous ...and makes a terrible mistake. His action changes lives - not only his own, but those of his family and the entire tightly knit community in which they live. Can he ever atone for the wrong he has done, and can love grow when its foundation is violence?Based on the legend of the selkies - seals who can transform into people - Sealskin is a magical story, evoking the harsh beauty of the landscape, the resilience of its people, both human and animal, and the triumph of hope over fear and prejudice. With exquisite grace, Exeter Novel Prize-winner Su Bristow transports us to a different world, subtly and beautifully exploring what it means to be an outsider, and our innate capacity for forgiveness and acceptance. Rich with myth and magic, Sealskin is, nonetheless, a very human story, as relevant to our world as to the timeless place in which it is set. And it is, quite simply, unforgettable.

'Sealskin is an accomplished and intelligent novel, a fine piece of craftsmanship and a pleasure to read'
Allan Massie

'Bristow has taken a known myth, and created an enthralling, human love story. A profound achievement, and a stunning debut'
Richard Bean

'An extraordinary book: original, vivid, tender and atmospheric. Su Bristow's writing is fluid and flawless, and this is a story so deeply immersive that you emerge at the end, gasping for air'
Iona Grey

'I love books in which magic takes on a gritty reality, and Sealskin is just such a book. Dark and brooding and half-familiar, the tale steals over you till you're half-in, half-out of a dream'
Jane Johnson

'An evocative story, told with skill and beauty, that held me spellbound until the very last page'
Amanda Jennings

'On the face of it, Sealskin is a gentle tale, a lovely reworking of the selkie legend many of us have known and loved since childhood. Do not be fooled, dear reader; beneath this simple re-imagining lies a story as deep as the ocean the selkie comes from. I was captivated from the first page to the poignant last one, by the sympathetically drawn characters and a mesmerising sense of place. In between are moments of tragedy, moments of grace and redemption; the whole wrapped in Su Bristow's charismatic writing. This is a story that catches on the edge of your heart, leaving tiny scars; reminders of a journey into a beloved legend, the human lives caught up in it and the consequences of the choices they make. It is, quite simply, exceptional'
Carole Lovekin

'In this achingly beautiful retelling of the classic Scottish folk tale, Su Bristow brings psychological depth and great warmth to the characters, making the ending all the more heart-breaking. It's a story about the tensions of life in a tiny fishing community, about bullying and violence as well as the healing magic of nature. It's written smoothly and skilfully with not a word too many or a word too few. I absolutely loved it and can't recommend it highly enough'
Gill Paul 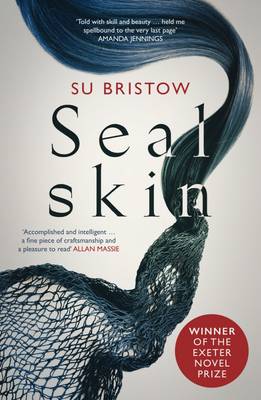 Su Bristow is a consultant medical herbalist by day. She's the author of two books on herbal medicine: The Herbal Medicine Chest and The Herb Handbook; and two on relationship skills: The Courage to Love and Falling in Love, Staying in Love, co-written withpsychotherapist, Malcolm Stern. Her published fiction includes 'Troll Steps' (in the anthology, Barcelona to Bihar), and 'Changes' which came second in the 2010 CreativeWritingMatters flash fiction competition. Sealskin is set in the Hebrides, and it's a reworking of the Scottish and Nordic legend of the selkies, or seals who can turn into people. It won the Exeter Novel ...