LoveReading View on The Faithful Couple

Coming after Snowdrops, A.D. Miller's Booker-shortlisted Moscow spy thriller, The Faithful Couple is a very different sort of creature altogether, a novel about male bonding, class and the vagaries of life, growing up and passing years that resonates deeply with both sometimes the voice and structural touch of David Nicholl's measured novels of ordinary people. Two young Englishsmen meet in California on an American gap year and forge a fascinating friendship in which envy and admiration make for awkward companions. An encounter they make whilst on a trip to Yosemite in which neither comes off with much honour will mark the rest of their lives and the ties binding them. The progress of their careers and love lives is examined at regular intervals with irony and acuity and their paths take surprising turns. A slow-building novel of British manners that grows on you page by page. ~ Maxim Jakubowski

Essentially this is a book about friendship, the very flawed yet compelling relationship between two men, based on experience, elation and remorse. With strong psychological and sexual components, the terse prose style draws you into a very recognisable world yet seen through an intensely strange filter. A literary human drama of the highest calibre. ~ Sarah Broadhurst

California, 1993: Neil Collins and Adam Tayler, two young British men on the cusp of adulthood, meet at a hostel in San Diego. They strike up a friendship that, while platonic, feels as intoxicating as a romance; they travel up the coast together, harmlessly competitive, innocently collusive, wrapped up in each other. On a camping trip to Yosemite they lead each other to behave in ways that, years later, they will desperately regret. The story of a friendship built on a shared guilt and a secret betrayal, The Faithful Couple follows Neil and Adam across two decades, through girlfriends and wives, success and failure, children and bereavements, as power and remorse ebb between them. Their bifurcating fates offer an oblique portrait of London in the boom-to-bust era of the nineties and noughties, with its instant fortunes and thwarted idealism. California binds them together, until-when the full truth of what happened emerges, bringing recriminations and revenge-it threatens to drive them apart. The Faithful Couple confirms Miller as one of the most exciting and sophisticated novelists in the UK - someone who can tell a great story, with a sense of serious moral complexity. This is that rare bird: a literary novel with mass appeal as well as the potential to win prizes.

'Powerful and moving. I loved The Faithful Couple' -- Roddy Doyle

'This could be the One Day of male friendship ... A book of deep insight from a writer emerging as one of our leading novelists' -- Jonathan Freedland

'Blown away by The Faithful Couple - next novel by @ADMiller18. You won't find a better - more taut - exploration of male friendship' -- Tim Samuels

'I was mesmerized by its versatility ... I adored the story of Neil and Adam ... towards the end, it felt as if I knew them both, and the moral questions raised throughout are so universal ... [A] beautiful story' -- Elif Shafak

'Miller is an energetic, muscular writer with a talent for storytelling and a fine ear for dialogue ... unlikely to disappoint' Independent on Sunday

'The book The Faithful Couple most brings to mind is the bestselling One Day by David Nicholls ... but Miller has the edge on Nicholls as a writer, and is skilled at the economical turn of phrase. Friendship, he writes, is a luxury in any utilitarian calculus - no money, no sex, no tangible pay-off of any kind . Except for readers of The Faithful Couple, who reap dividends' Sunday Telegraph 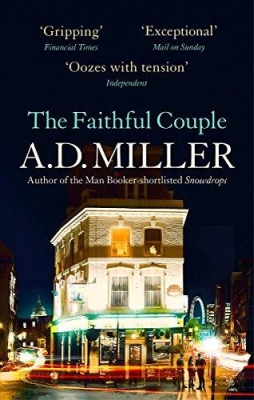 About A. D. Miller

A. D. Miller studied literature at Cambridge and Princeton. His first novel, Snowdrops - a study in moral degradation set in modern Russia - was shortlisted for the Man Booker Prize, the James Tait Black Prize, the Los Angeles Times Book Awards, the CWA Gold Dagger and the Galaxy National Book Awards; it has been translated into 25 languages. He is also the author of The Earl of Petticoat Lane, an acclaimed memoir of immigration, class, the Blitz and the underwear industry. A.D. Miller is Writer at Large for The Economist; he was formerly the magazine's Moscow Correspondent and Political ...

More About A. D. Miller

More Books By A. D. Miller

View All Books By A. D. Miller