Everyoneâ€™s favourite dragon is back! Following on from the first book,  Naomi Novik does a  fantastic job of developing the relationship between Captain Laurence and Temeraire as they travel East as they are commanded to return the dragon to the Chinese. Definitely think Jonathan Strange meets Patrick Oâ€™Brian - I canâ€™t wait for the next part!

History takes flight in this deliciously addictive novel, which captures the Napoleonic period perfectly and skilfully layers history with imagination by adding a Dragon Air Force to the battle for England.

Temeraire is a Celestial dragon, the most highly-prized of all draconic breeds; famed for their intelligence, agility and most of all for the Divine Wind â€“ their terrible roar capable of shattering the heavy timbers of war ships and devastating woodland. Captured by the British, Temeraire was meant to be the companion of the Emperor Napoleon and not captained by a mere officer in the British Air Corps. The Chinese have demanded his return and the British government cannot afford to provoke the Asian super-power into allying with the French â€“ even if it costs them the most powerful weapon in their arsenal, and forces Laurence and Temeraire apart.

"Temeraire is a terrifically entertaining fantasy novel. Is it hard to imagine a cross between Susanna Clarke, of Norrell and Strange fame, and the late Patrick O'Brian? Not if you've read this wonderful, arresting novel." â€“ Stephen King

"A splendid novel. Not only is it a new way to utilize dragons, it's a very clever one and fits neatly into the historical niche this author has used. The plot was excellent, extraordinary in that the reader has no idea where it's leading â€“which is always fun. Let's hope this is the first of many from Naomi Novik. She'll be one to watch." â€“ Anne McCaffrey

"Just when you think you've seen every variation possible on the dragon story, along comes Naomi Novik to prove you wrong. Her wonderful Temeraire is a dragon for the ages and a fitting companion for the brave, steadfast Will Laurence." â€“ Terry Brooks 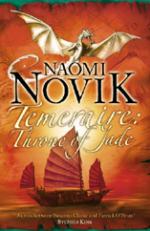 An avid reader of fantasy literature since age six, Naomi Novik is also a history buff with a particular fascination with the Napoleonic era and a fondness for the work of Patrick O'Brian and Jane Austen. She began writing as a guilty pleasure while studying for her Master's degree in Computer Science at Columbia. She found an opportunity to combine her passions by developing computer games, starting with a multi-player online science fiction game she created in college that has now been in continuous operation for almost a decade. She is also the founder and organizer of Vividcon, the annual ...

View All Books By Naomi Novik