This Book Will Save Your Life

LoveReading View on This Book Will Save Your Life


This review is provided by bookgroup.info.

The cover of this book is a triumph of marketing over good sense. The title is, I guess, a parody and, along with the doughnuts (sorry, donuts), it makes the book look like yet another diet manual. All very smart, but it doesnâ€™t do justice to what is a hugely enjoyable and amusing story about a man who has the misfortune to be very rich and living in one of the most affluent and beautiful places in the world.

Richard Novak has amassed a fortune by trading on the stock market and lives in a house on millionaireâ€™s row in LA. But somewhere along the way he has shut down emotionally and withdrawn from the world, his only contact being through the internet and with the various people who service his house needs. It takes a physical crisis and a visit to A & E to start his journey back to being a fully-feeling human being.

Richard the recluse suddenly finds himself a local super-hero who saves a horse (hoisted out of a hole by a movie star with a helicopter), a woman kidnapped by a psycho and a man drowning at sea, amongst others. His ex-wife keeps turning on the television to see him at the centre of yet another drama. It is very funny and there are some telling off-camera moments, like the childâ€™s birthday celebration in a restaurant where the child, given a knife to cut the cake, repeatedly stabs it while his parents look on, bewildered.

Through his random acts of generosity, Richard becomes involved with some great characters and goes some way towards redeeming his self-centred loveless years. He also, poignantly, begins to repair the pain he caused by abandoning his son, Ben.

So, ignore the cover and the really rather embarrassing endorsement by Mark Haddon (â€œWeird and warm and wise and really rather wonderfulâ€), and read it. It wonâ€™t change your life but itâ€™ll certainly give you some pleasurable hours as well as an insight into California life as the apotheosis of consumer culture.

This Book Will Save Your Life Synopsis

An uplifting story set in Los Angeles about one man's effort to bring himself back to life. Richard is a modern day everyman; a middle-aged divorcee trading stocks out of his home. He has done such a good job getting his life under control that he needs no one. His life has slowed almost to a standstill, until two incidents conspire to hurl him back into the world. One day he wakes up with a knotty cramp in his back, which rapidly develops into an all-consuming pain. At the same time a wide sinkhole appears outside his living room window, threatening the foundations of his house. A vivid novel about compassion and transformation, This Book Will Save Your Life reveals what can happen if you are willing to open up to the world around you. 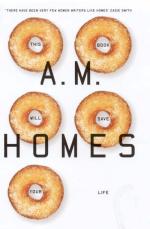 A.M. Homes is the author of four novels â€” In a Country of Mothers, The End of Alice, Music for Torching, and Jack â€“ and two collections of short stories, The Safety of Objects and the recent highly acclaimed Things You Should Know. She is a contributing editor to Vanity Fair and teaches in the writing programme at Columbia University. She lives in New York City.Photograph Â© Marion Ettlinger