The Signature of All Things

The Signature of All Things Synopsis

From the moment Alma Whittaker steps into the world, everything about life intrigues her. Instilled with an unquenchable sense of wonder by her father, a botanical explorer and the richest man in the New World, Alma is raised in a house of luxury and curiosity. It is not long before she becomes a gifted botanist in her own right. But as she flourishes and her research takes her deeper into the mysteries of evolution, the man she comes to love draws her in the opposite direction - into the realm of the spiritual, the divine and the magical. The Signature of All Things soars across the globe of the nineteenth century, from London and Peru, to Philadelphia, Tahiti and beyond. Peopled with extraordinary characters along the way, most of all it has an unforgettable heroine in Alma Whittaker.

The Signature of All Things Press Reviews

Unlike anything else she has ever written ... Its prose has the elegant sheen of a 19th-century epic, but its concerns - the intersection of science and faith, the feminine struggle for fulfilment - are especially modern -- Steve Almond International Herald Tribune

Ms Gilbert has established herself as a straight-up storyteller who dares us into adventures of worldly discovery, and this novel stands as a winning next act ... A bracing homage to the many natures of genius and the inevitable progress of ideas, in a world that reveals its best truths to the uncommonly patient minds -- Barbara Kingsolver International Herald Tribune

Elizabeth Gilbert is the author of a short story collection, Pilgrims (a finalist for the PEN/Hemmingway Award), a novel, Stern Men and a book of non fiction, The Last American Man (nominated for the National Book Award and a New York Times Notable Book for 2002). She is a writer-at-large for American GQ where she has received two National Magazine Award nominations for feature writing. Elizabeth Gilbert currently lives in Philadelphia.Photograph © Marion Ettlinger 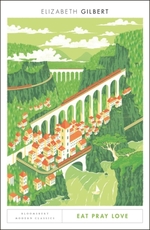 View All Books By Elizabeth Gilbert