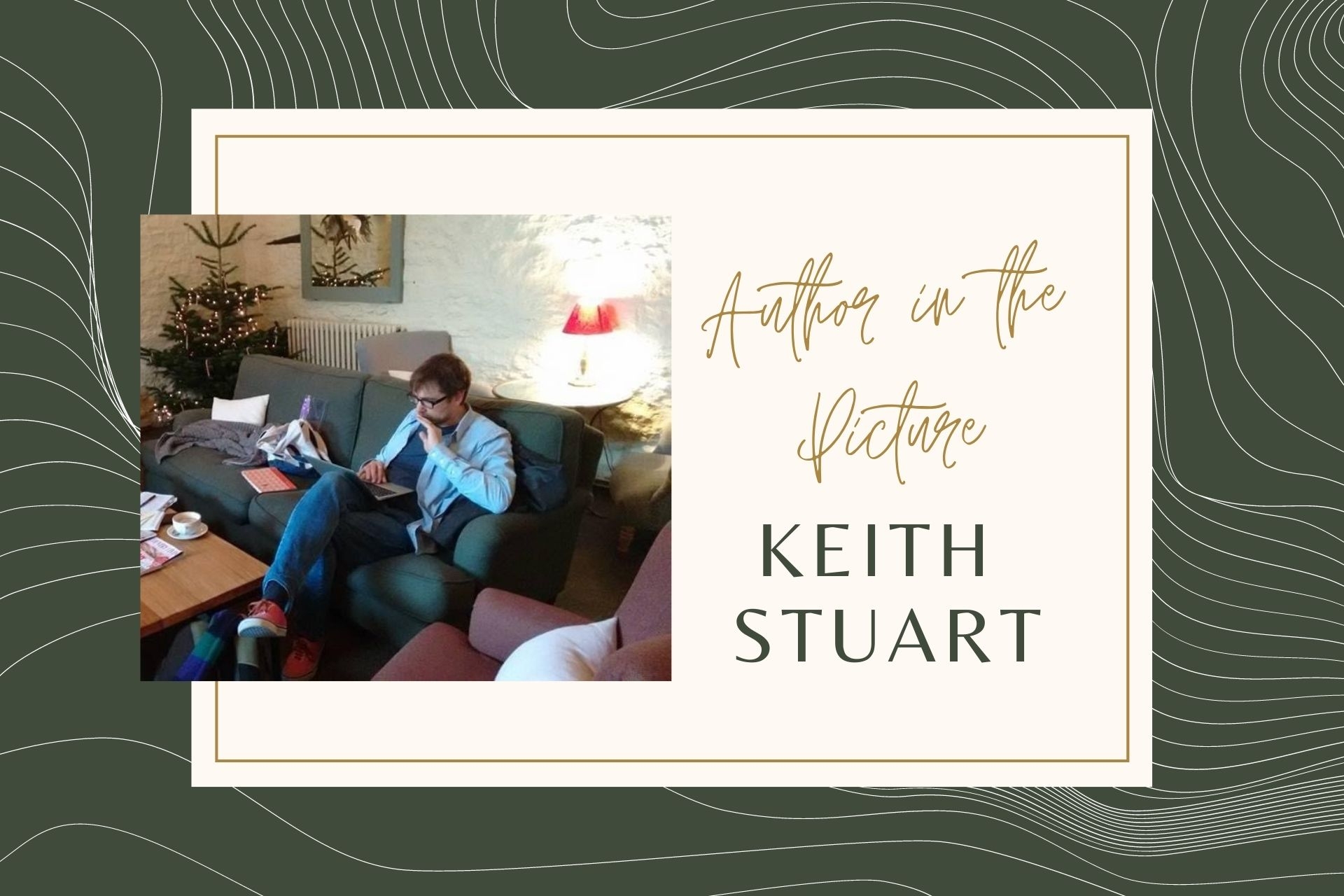 Keith Stuart has been a favourite with the LoveReading team since his debut A Boy Made of Blocks which was one of our Books of the Year in 2016. He is not only an author, but also a journalist, writing about video games, technology, and digital culture. He has the ability to write novels that encourage thoughts and emotions to soar and dip and soar again. He opens a door to what it is to be human and to explore possibilities. His latest novel The Frequency of Us is a LoveReading Star Book, it gleefully crosses genres, and is a wonderfully satisfying and mesmerising read.

I fell into Stuart’s pictures and descriptions. The first has huge impact, I adore his most memorable book event (what a legend she is), and isn't the Betty and Penguin classic bookcase photo gorgeous! Thank you and over to you Keith. 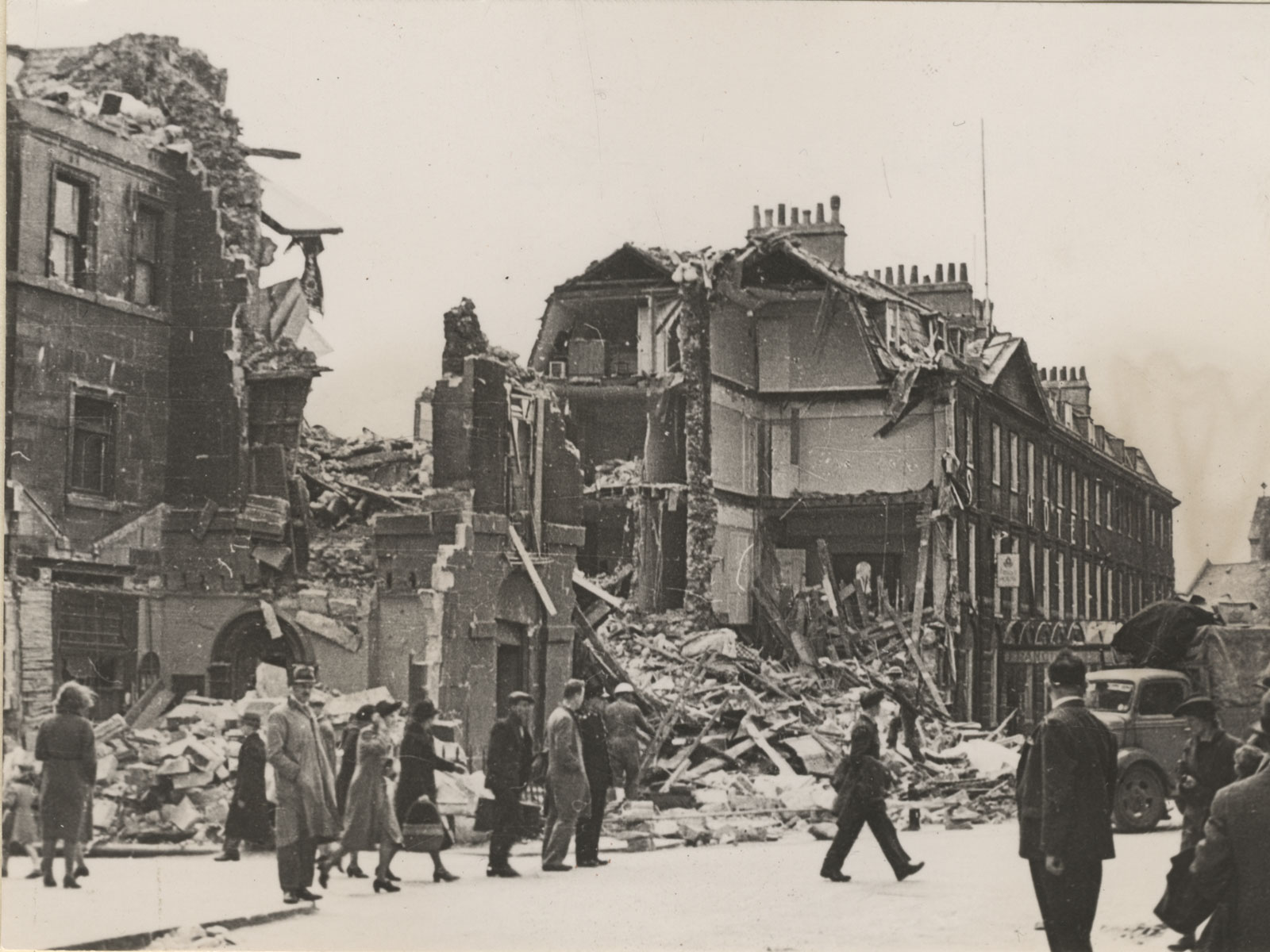 I’ve lived in and around Bath for 25 years and love the way that its grand architecture bears the scars of previous generations. The bombing of the city in 1942 had a devastating effect, and you can still see shrapnel damage on several buildings. While I was writing The Frequency of Us, which is partly set in Bath during the 1930s and 40s, I wandered the streets with an old map of the city and a few reference books, studying where the bombs fell and what damage they did. 19,000 buildings were affected and whole areas were flattened and lost forever. This photo of the Francis Hotel on Queens Square was really inspiring – it shows the beautiful building almost cut in half by a bomb, but what you also see are people going about their lives, coping and carrying on; this really affected me. Even in the worst circumstances, we find a way to live our lives – it is something I guess we’ve all discovered once again in the Covid era.

The book that made you first want to become an author 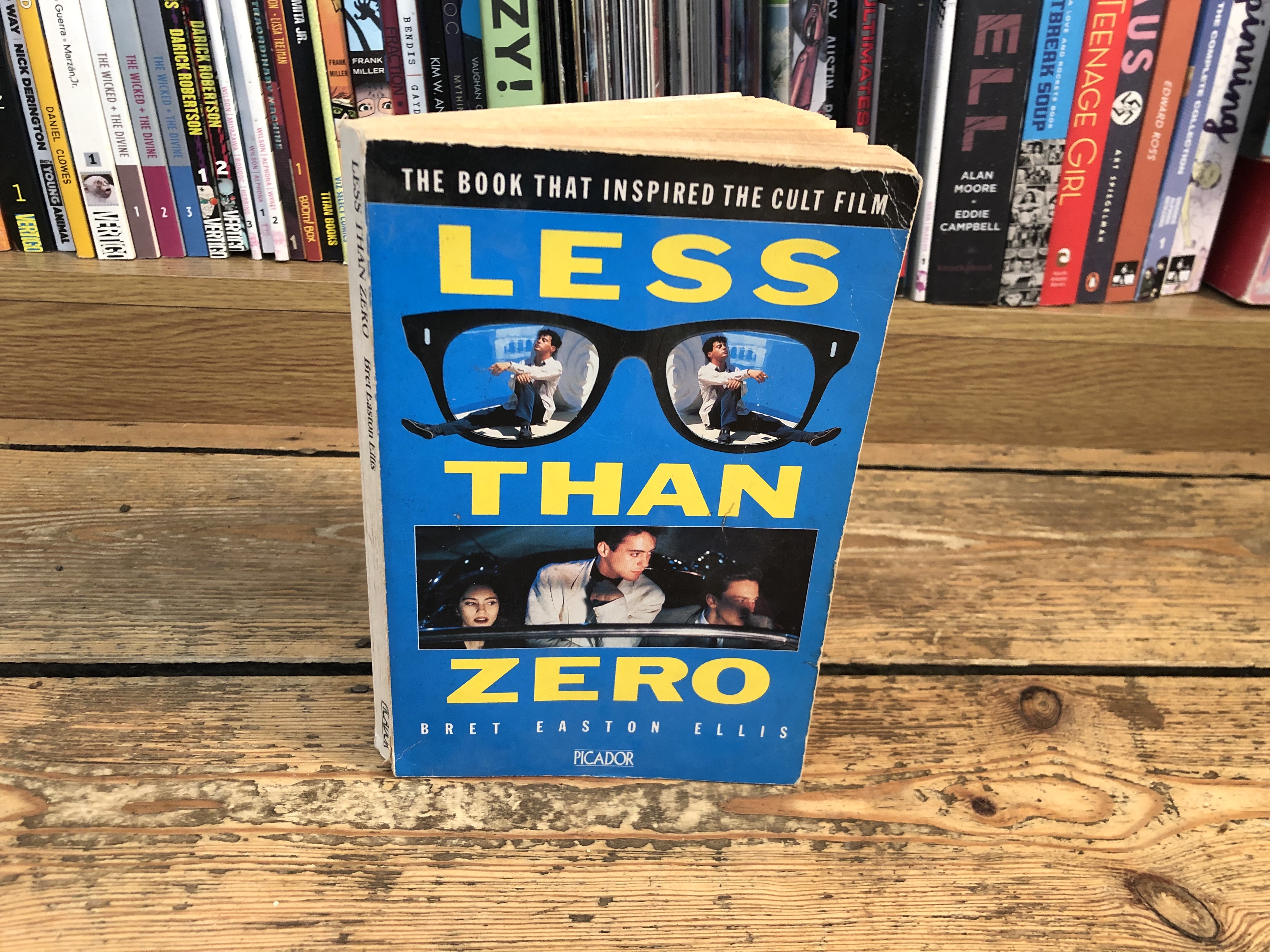 I have to admit, I wasn’t a big novel reader in my teens – I preferred comics and graphic novels, and found it really difficult to engage with the books we were studying at school. Then, when I was 18, I just stumbled across Less Than Zero in the old Foyles on Charing Cross Road and it seemed interesting, modern and different. When I read it, it just completely blew me away. The sparse writing, the total nihilism of the characters, the clothes, the references to cool bands – I didn’t realise novels could be like this. It set me off on a path of discovering young American novelists – Jay Mcinerney, Tama Janowitz, Donna Tartt – and suddenly I was a book reader. I remember when I went for my interview to study English and Drama at Warwick University, I spent the whole time enthusing about Less Than Zero and how it brilliantly conveyed the spaces between moments and people and actions. When I left the room, I assumed I’d blown it because I didn’t know any of the classic works that the interviewing professor asked me about and had just chatted away about this one weird book. To my surprise, however, I received an unconditional offer of a place. That was the first time I thought I might have something to say about stories. Of course, now I know that the book is very problematic and misogynistic and that Bret Easton Ellis has some extremely unpleasant views. But reading Less Than Zero at that age… it got me thinking about literary style in a way I never had before.

A location that has inspired you 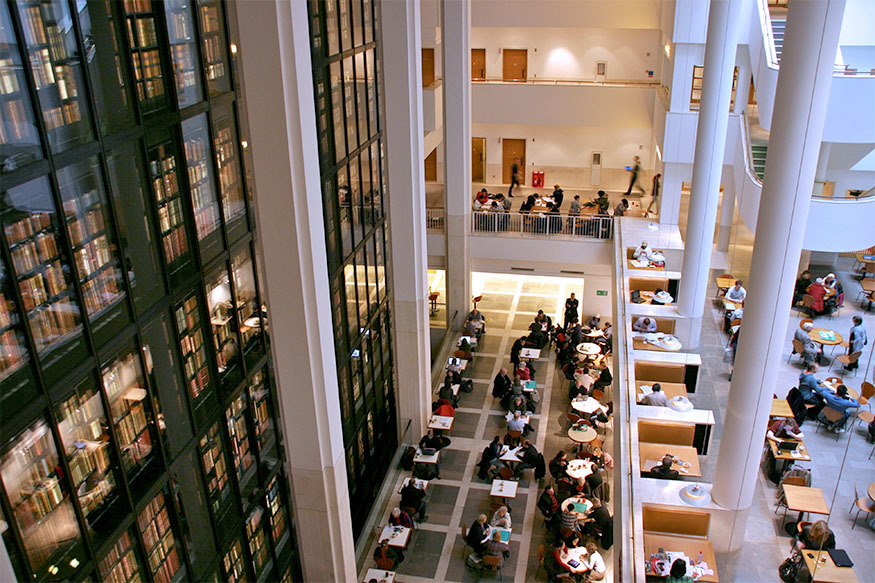 The British Library is an incredible institution. The building itself is a modern architectural marvel, especially the King’s Library, which spans several floors at the heart of the edifice, but the idea anyone can walk in, sit down and study among hundreds of thousands of historic books is kind of beautiful. In The Frequency of Us, lead character Laura visits the library to do some research and her feelings of wonder and slight intimidation reflect my own when I first got my reading card here. I wrote sections of the novel in the humanities reading room and to reward myself, I took regular trips down to the museum. You can just wander casually around and see Jane Austen’s reading glasses, or John Lennon’s handwritten lyrics for Strawberry Fields. What a privilege! I’ve missed this place so much during lockdown.

Your most memorable book event 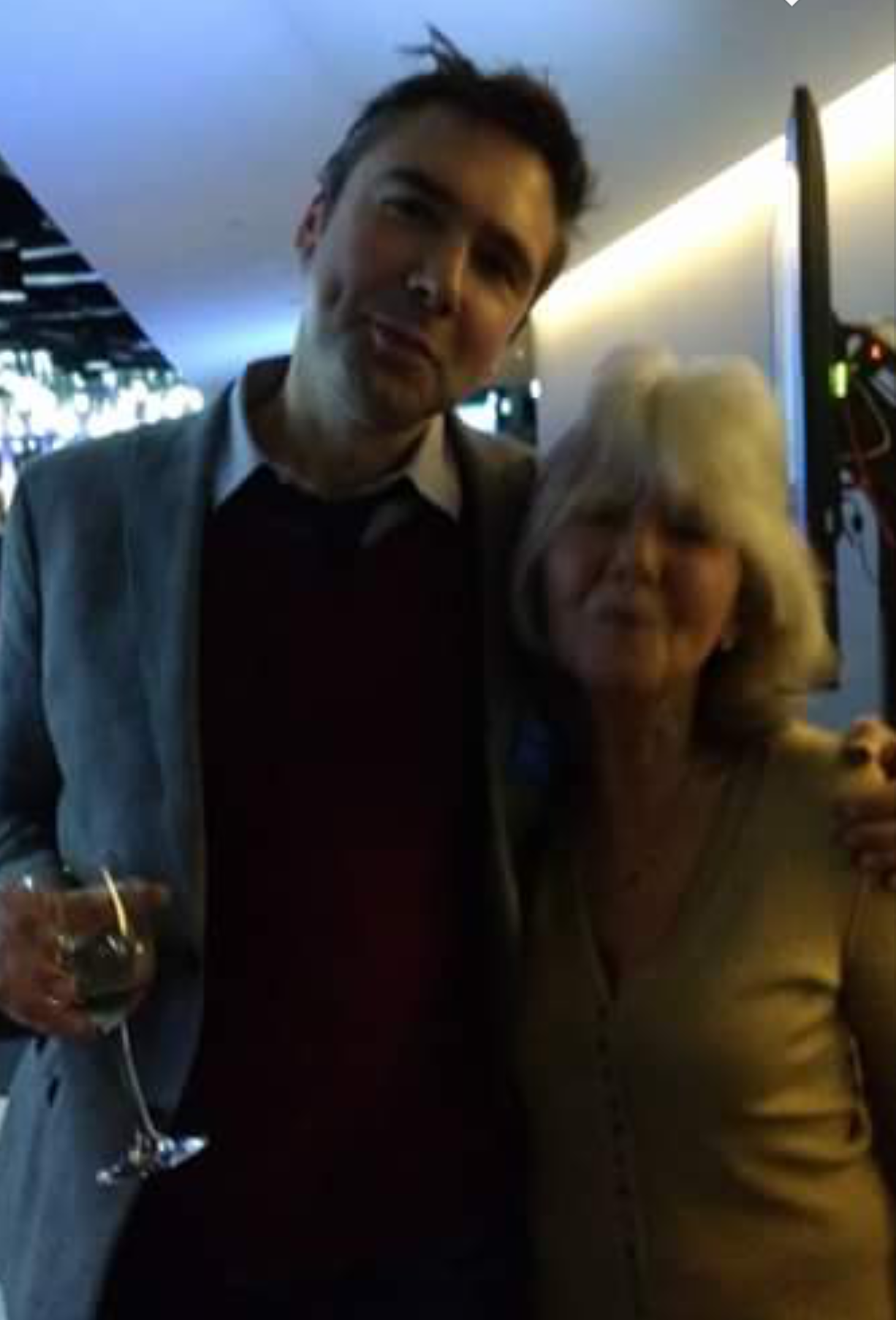 This rather blurry photo was taken during the launch party of the Richard and Judy Book Club in Spring 2016, when my first novel A Boy Made of Blocks was selected. It was my first literary soiree and my wife Morag and I got quite tipsy on the free sparkling wine. I met some amazing authors including David Nichols and Robert Harris, but toward the end of the evening we caught sight of Jilly Cooper just as she was leaving. We thought we’d missed our chance to say hello, but then Morag put her glass of wine down and said ‘no, this is a once in a lifetime opportunity’ – then she grabbed my arm and ran after Jilly. We caught her just at the exit and had a really lovely chat. While we were talking, my wife snuck a copy of my book into her handbag. I think the blurriness of the photo suits the moment perfectly – it was exciting and slightly drunken, and we’d met one of the greatest popular novelists of the modern age and couldn’t quite believe it.

The photo that best sums up your author journey 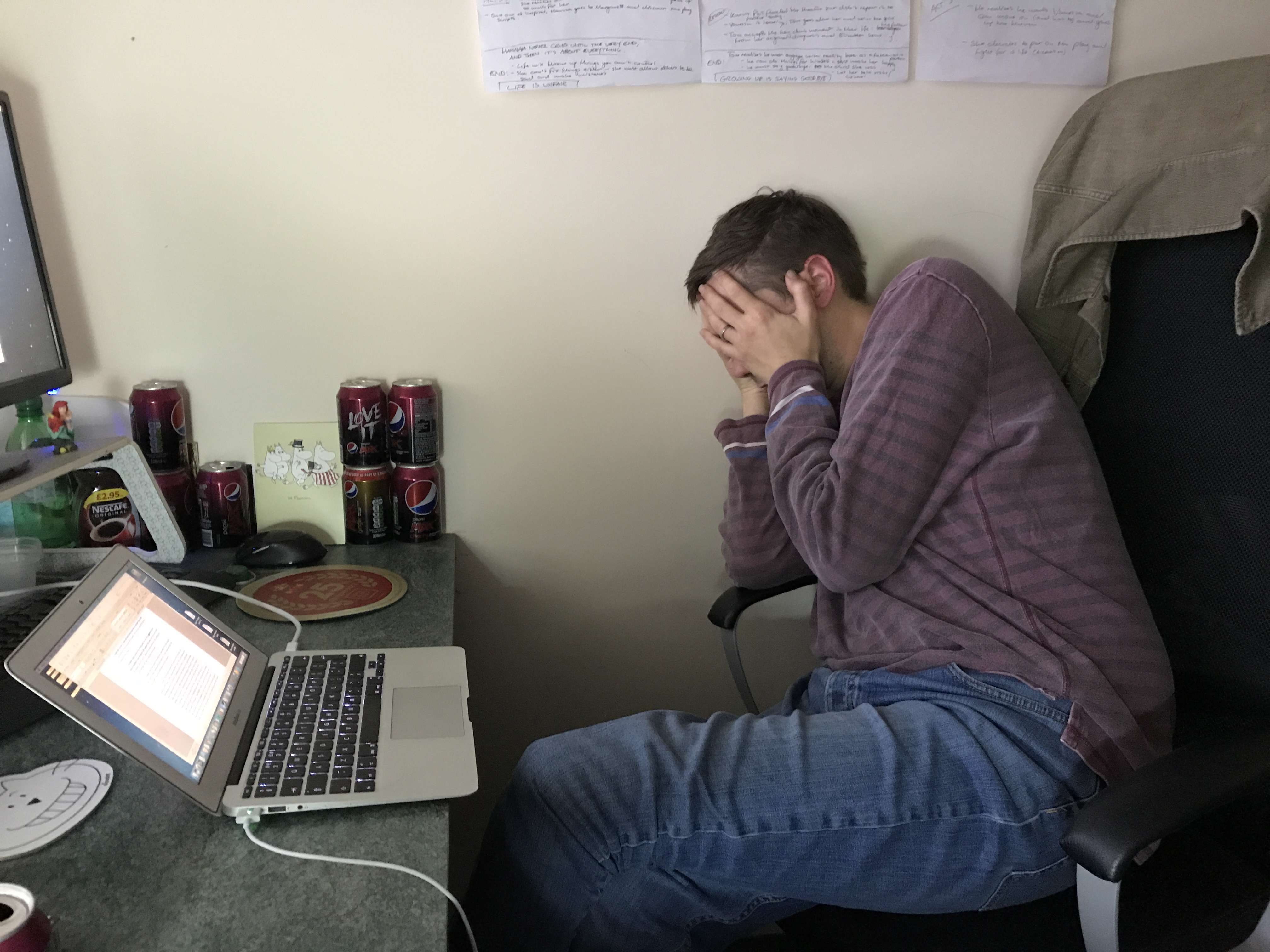 I’ve been to some amazing events and festivals as an author, from Brussels to Rio de Janeiro, but all of that stuff is supplementary to the actual reality of writing – which is months of lonely slog. This photo was taken by my friend Joao while I was in the process of editing my second novel Days of Wonder. It had taken me several days to cut 15,000 words from the text and I was trying to ensure I hadn’t introduced any continuity errors. Keeping a mental map of an entire novel is incredibly difficult, especially when you keep moving stuff around or erasing it entirely, and when the picture was taken, I was really struggling – I’d started to think the story would never hold together. But I got there in the end and I was very happy with the book once I’d finished it and had a few weeks’ rest! I keep this photo on my laptop to remind me that the darkest moments of doubt and difficulty are only phases and that I’ve usually found a way out in the past.

By the way, on the wall behind me you can just see the synopsis I wrote on three pieces of A3 paper. I stuck these up next to my desk so I could look up anytime and see the structure of the book as it was meant to be. It was the map that guided me through.

The bookshelf you return to again and again 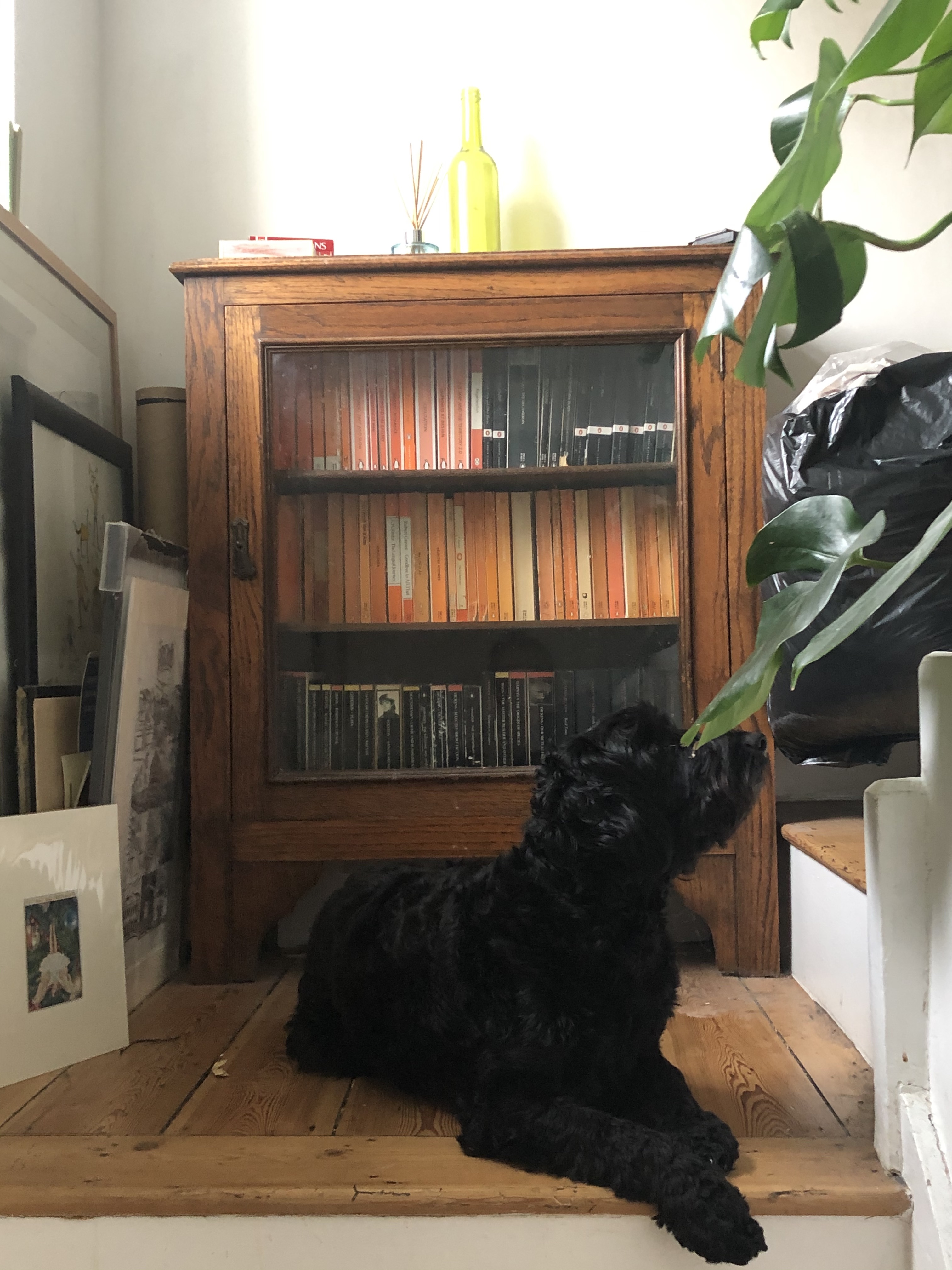 We bought this knackered little bookcase from the antique shop across the road from our first house in Frome, just after we moved in. We put all our Penguin classics in it and now it sits at the top of our staircase in our current home. It has a nice kind of musty smell about it, partly from the old wood, but also from the books themselves which I’ve picked up from second-hand shops over the last thirty years. My favourite classics are in here – Jane Eyre, Great Expectations, Diary of a Nobody – but also lots of books that I just like to dip into as I’m passing. It’s nice to lounge about on the stairs idly flicking through Zelda Fitzgerald’s short stories or Journal of a Plague Year. I’d have books everywhere in the house if I could.

Also, the dog is Betty, our three-year-old cockerpoo – she likes to sit at the top of the stairs too, I think it’s because she’s seen me doing it and likes to be one of the gang.

A favourite place to write 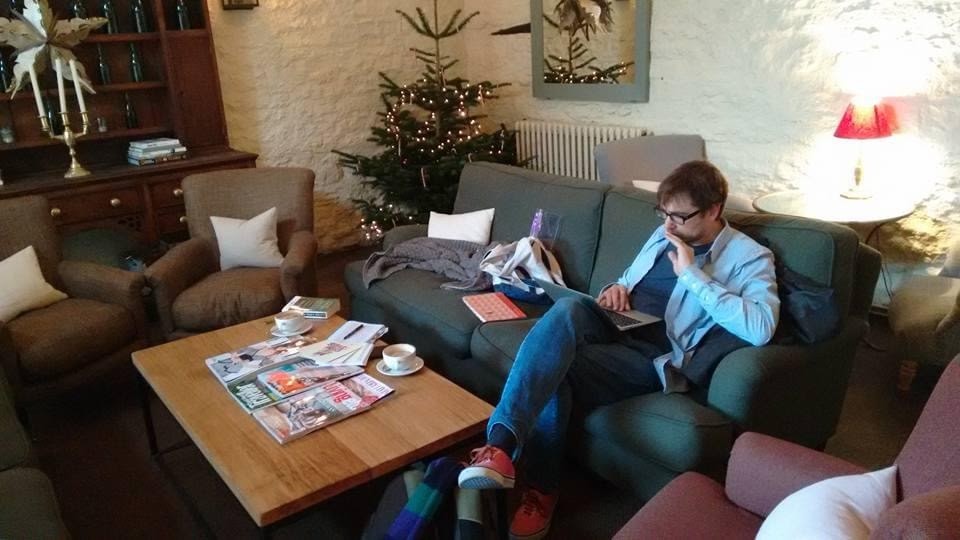 I really like writing in public places – in cafes, pubs and libraries – because I think the buzz of people and chatter helps to sort of infuse the writing with life. Also, people-watching is really helpful research when you’re trying to build new characters; you notice quirky behaviours and ways of moving and speaking, and these are invaluable reference materials! This is a photo of me working on Days of Wonder at the Talbot Inn in Mells, a beautiful country pub with a little annex that looks like a living room. I spent several days working on the novel here; in the mornings I’d drink coffee and in the afternoon I’d switch to red wine! In my opinion, wine is definitely a very useful accompaniment to writing emotional scenes.

Keep up to date with Keith Stuart

If you enjoyed this, check out more titles by Keith Stuart. You can also visit the Author Talk section of our blog to find more Author Q&As and 'Putting Authors in the Picture' features.