I am thrilled that author Chris Hammer is joining us for the October Author in the Picture feature. His debut book Scrublands is an absolute belter, it was published in 2018 and won the CWA John Creasey Debut Dagger Award, as well as being shortlisted for Best Debut Fiction at the Indie Book Awards, and Best General Fiction at the ABIA Awards. It has also been longlisted for the Ned Kelly Best Crime Novel of the Year. Scrublands was optioned for television by Easy Tiger (a FremantleMedia company). Last month we recommended his second novel Silver, which I adore, it really is a beautifully written piece of crime fiction and gets top marks from me. I simply can’t wait for his third book in the Martin Scarsden series Trust, available in October in ebook, and in January in hardback.

Chris Hammer was a journalist for more than thirty years, dividing his career between covering Australian federal politics and international affairs. For many years he was a roving foreign correspondent for SBS TV's flagship current affairs program Dateline. He has reported from more than thirty countries on six continents. Chris's non-fiction book, The River, published in 2010 to critical acclaim, was the recipient of the ACT Book of the Year Award and was shortlisted for the Walkley Book Award. Chris has a bachelor's degree in journalism from Charles Sturt University and a master's degree in international relations from the Australian National University. He lives in Canberra with his wife, Dr Tomoko Akami. The couple have two children.

I get a real kick out of seeing the photos chosen by each author for this article. It was really interesting to see the photo chosen for the “the image that helped focus your latest book” as I really did connect to this in Silver.  His favourite writing spot is perhaps a little different (and rather wonderful) and the booky photo that makes Chris smile is really lovely.

And so, I would like to introduce to Chris Hammer, our author in the picture for October:

Tintin. As a reader, there were books that captivated me more, but I reckon the Tintin books were the first to have me thinking: ‘How much fun would it be to make up something like that?’ Of course, I can’t draw to save myself, but there is a part of me that still takes joy from making stuff up, to create a world that didn’t exist before. Merci, Hergé. 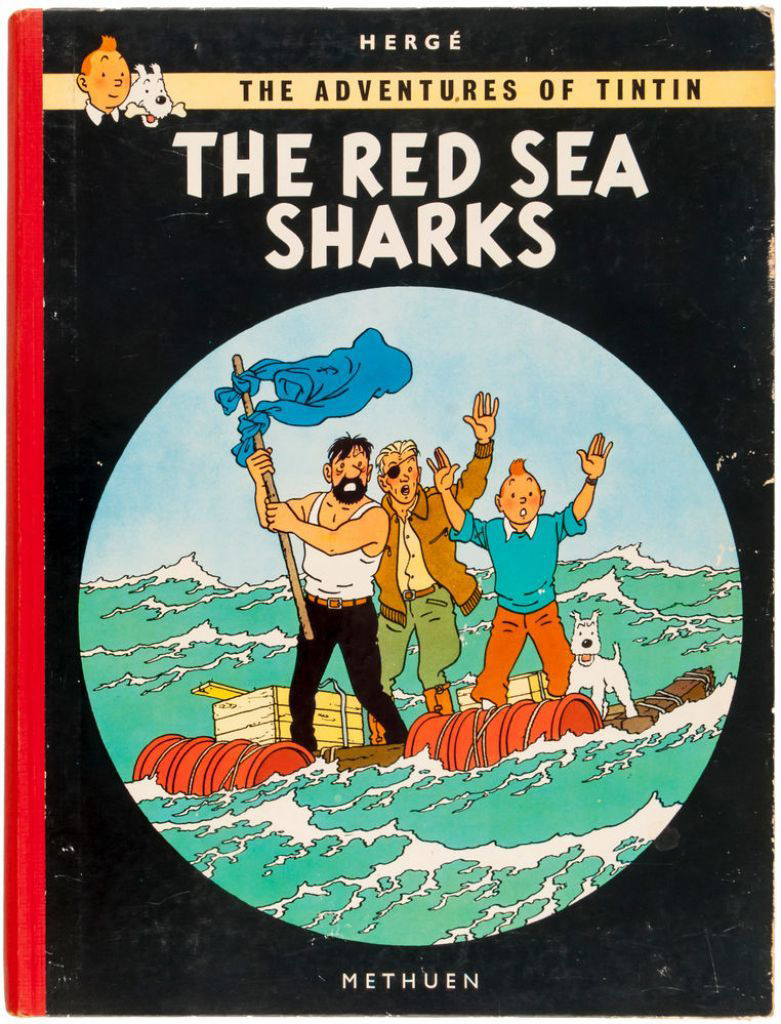 Krattlandet. This is the Norwegian edition of Scrublands. It’s not the design that elevates it for me, it’s the idea: my book, which started as little more than a hobby, has ended up being published in translation in the home of Scandi Noir. For an author living on the far side of the world, there is something deeply satisfying about that. 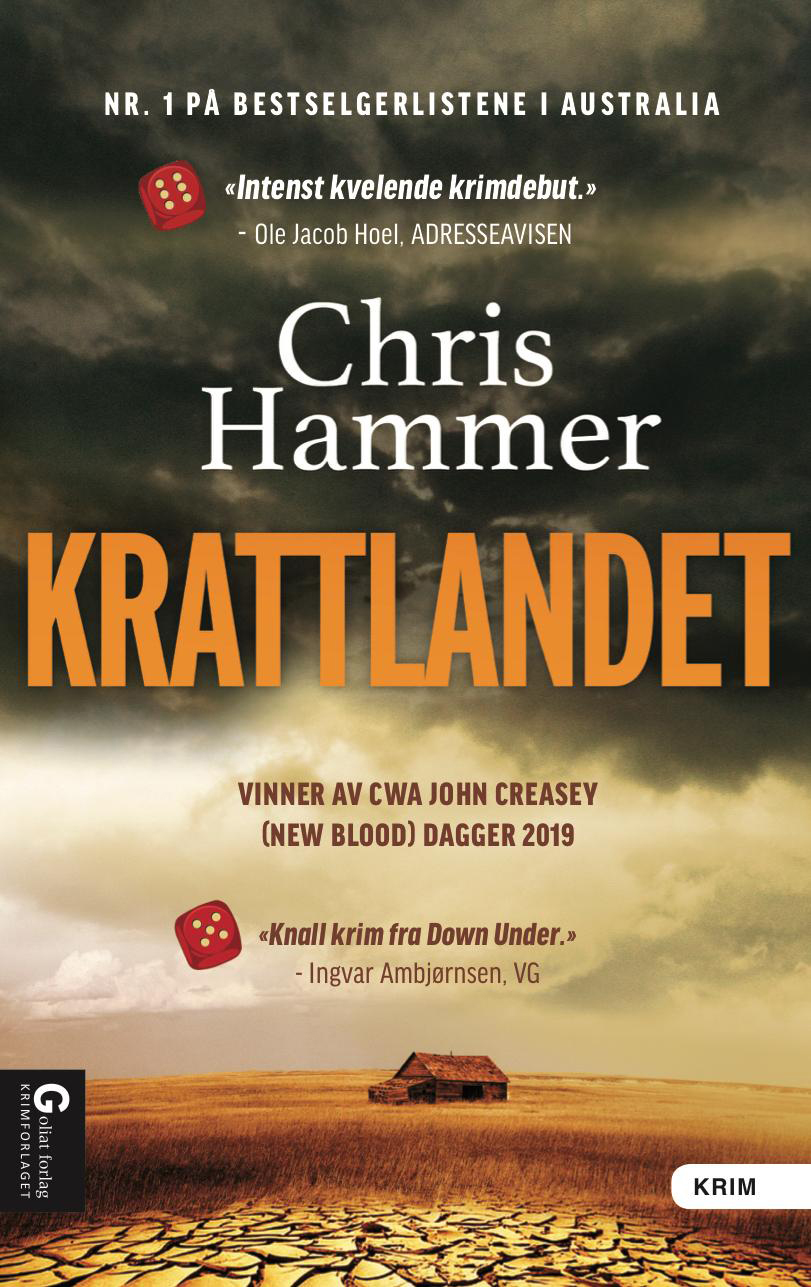 All crime writers have timelines that help guide them and ensure their plots retain their internal logic. I also use maps. I started drawing them to ensure consistency in locations and the distances, which is important when you are creating fictional locations. When my publisher suggested including them in the books, and employing a proper artist to produce them, I absolutely leapt at it. It’s one aspect of fantasy books I have always enjoyed. Aleksander J Potočnik  crafted the beautiful maps in all three books, Scrublands, Silver and the upcoming Trust. As a special commission he did coloured versions for me. I love them. 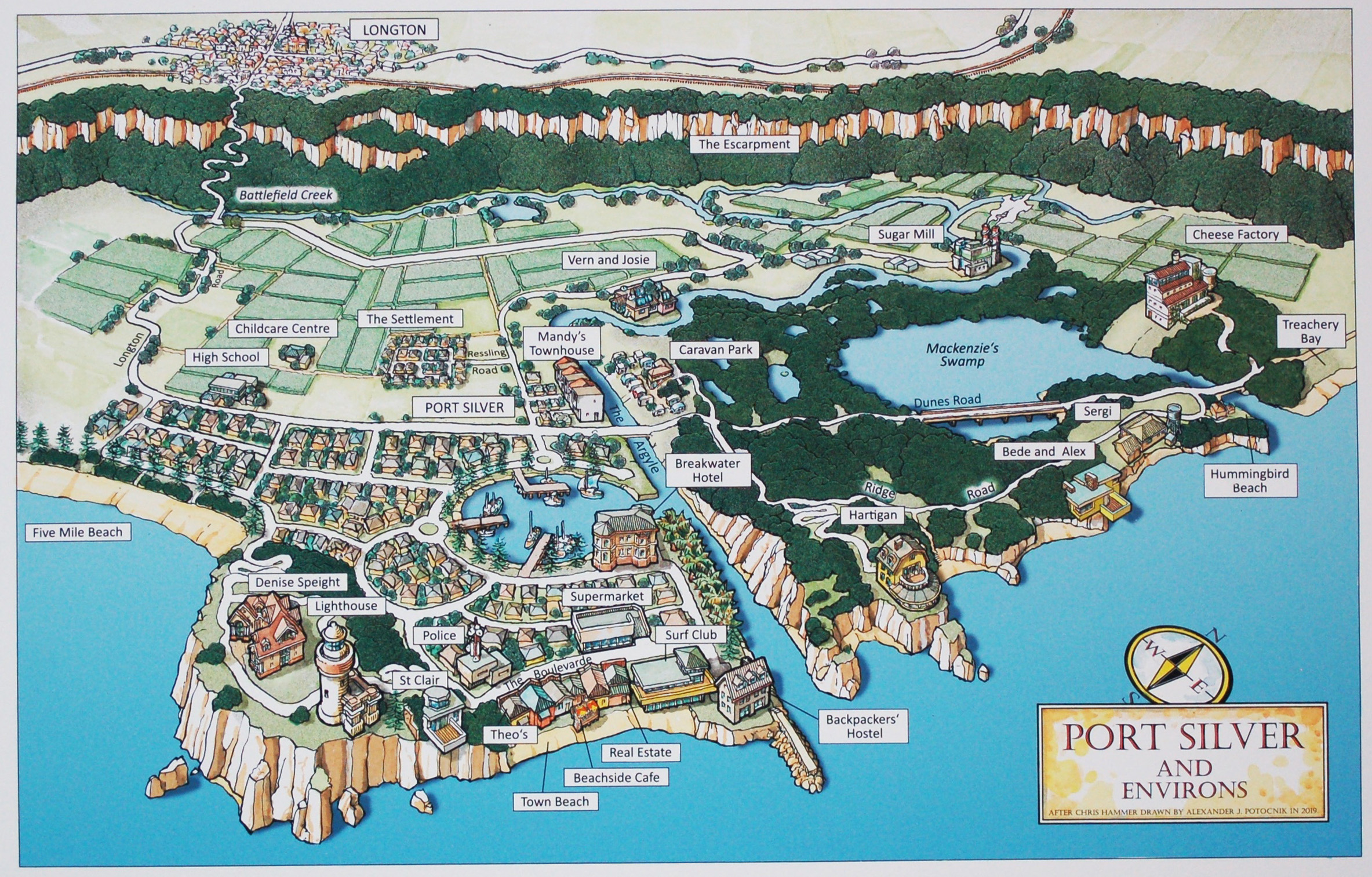 There are writers who need to be barricaded away in their special spot. A friend of mine wears industrial earmuffs! I’m the opposite: I write anywhere. In fact, I think I am happiest, and most productive when I’m on the move, maybe a legacy from my years as a foreign correspondent. For example, I always catch the train between Canberra and Sydney. You can fly in half an hour, the bus takes just three. The train is so old and the tracks so dodgy it takes four-and-a-half hours. But it’s worth it. I write away as the world passes by. And it has a bar.

Location that has inspired you

The Australian landscape is a godsend to crime writers. There are so many dramatic and varied locations. I took this photo when I was researching an early non-fiction book at the height of a devastating drought. It was that trip, and that landscape, that inspired the location for my crime debut, Scrublands. 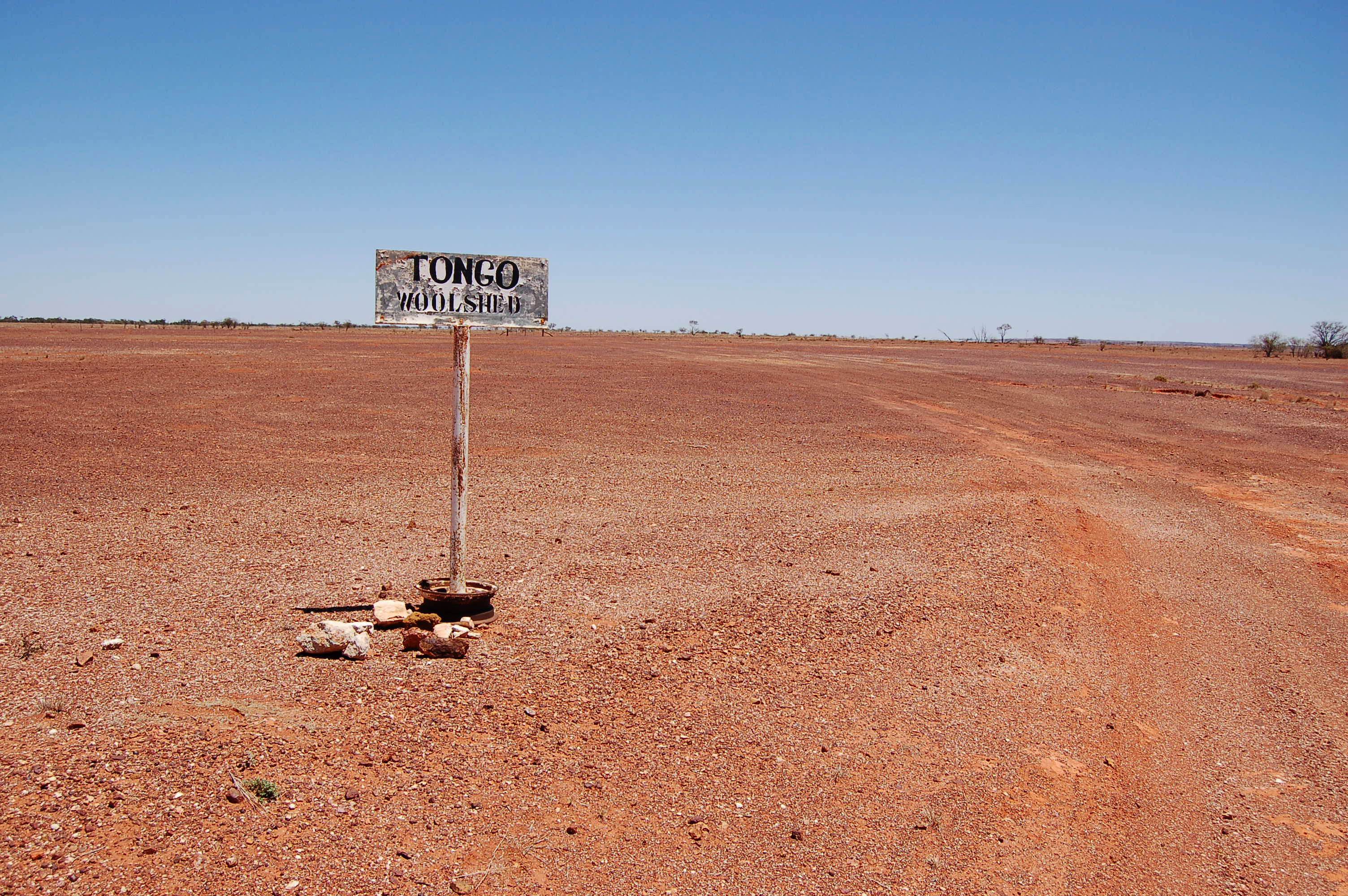 The Photo that best sums up my author Journey

I’m not sure if it sums it up, but it’s surely a high point, winning the UK CWA’s New Blood dagger in October 2019 for Scrublands. It was an amazing night in London, a glittering occasion, with the trophy to be treasured always. It seemed so surreal back then, little more than a year after Scrublands was published. It seems even more surreal now, with Covid making travel to Britain impossible. 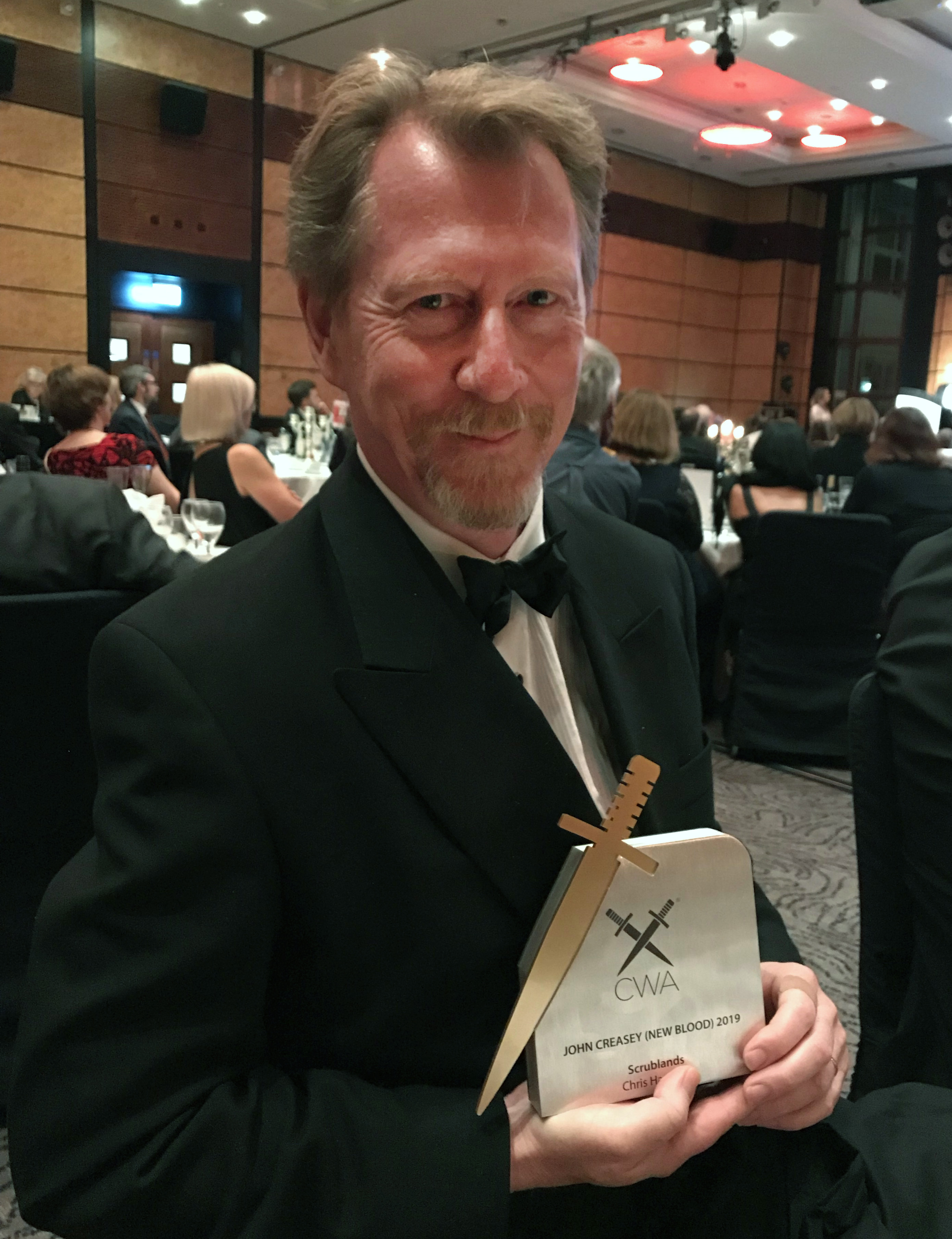 This is definitely one of the very best. To be selected by Val McDermid to appear on her New Blood panel at the Harrogate Crime Festival. You can see from the photo how much I enjoyed the panel, but it was the festival itself that really wowed me: such a engaged, amusing and supportive group of writers and critics, publishers and fans. 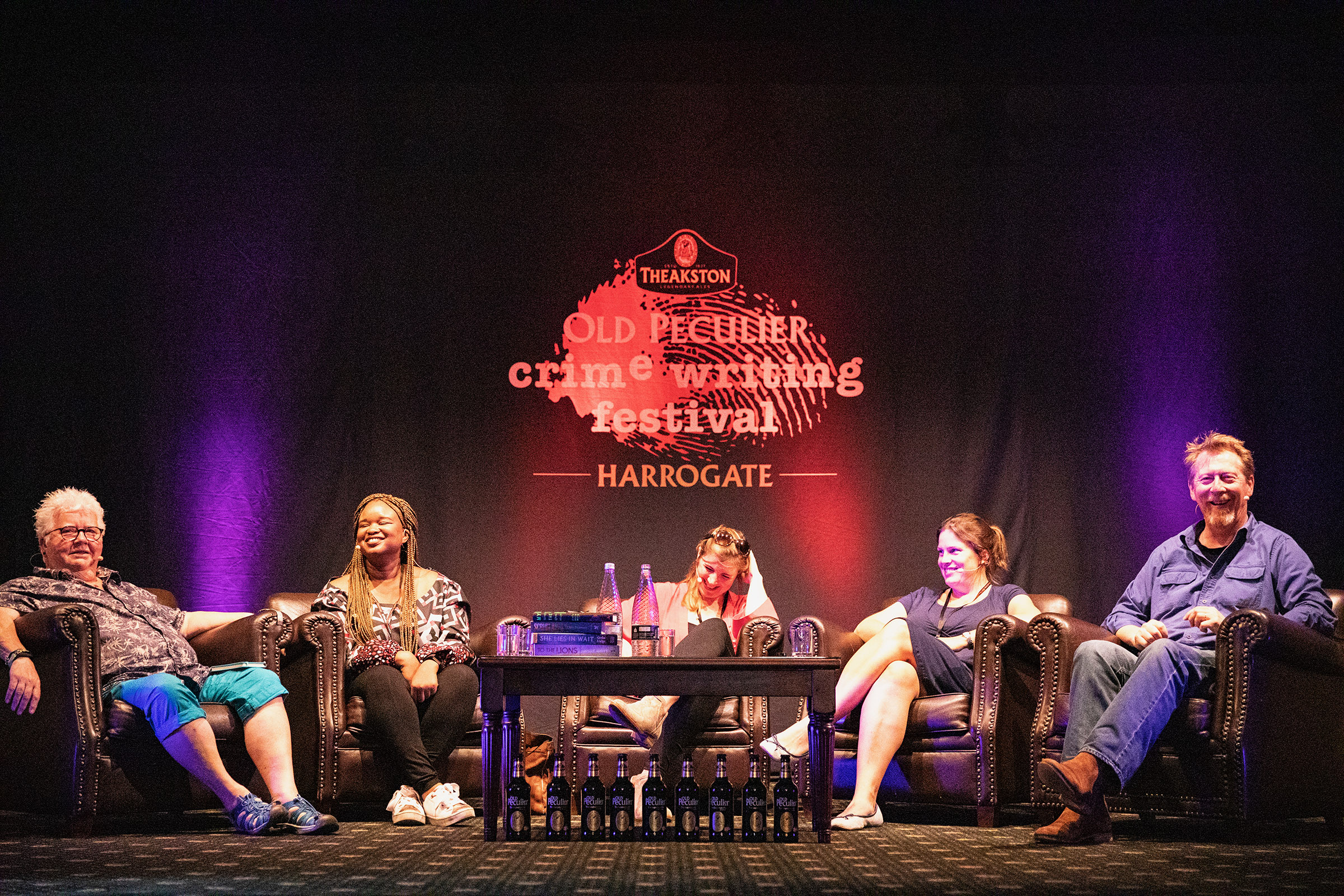 Your favourite reading or writing snacks

Coffee. Essential, indispensable, necessary. I’ve owned a long line of these stove top espresso makers stretching back to my early twenties. Of course, there are fancier machines, but for me the day hasn’t started, and neither has any writing, until I’m drinking my first cup. 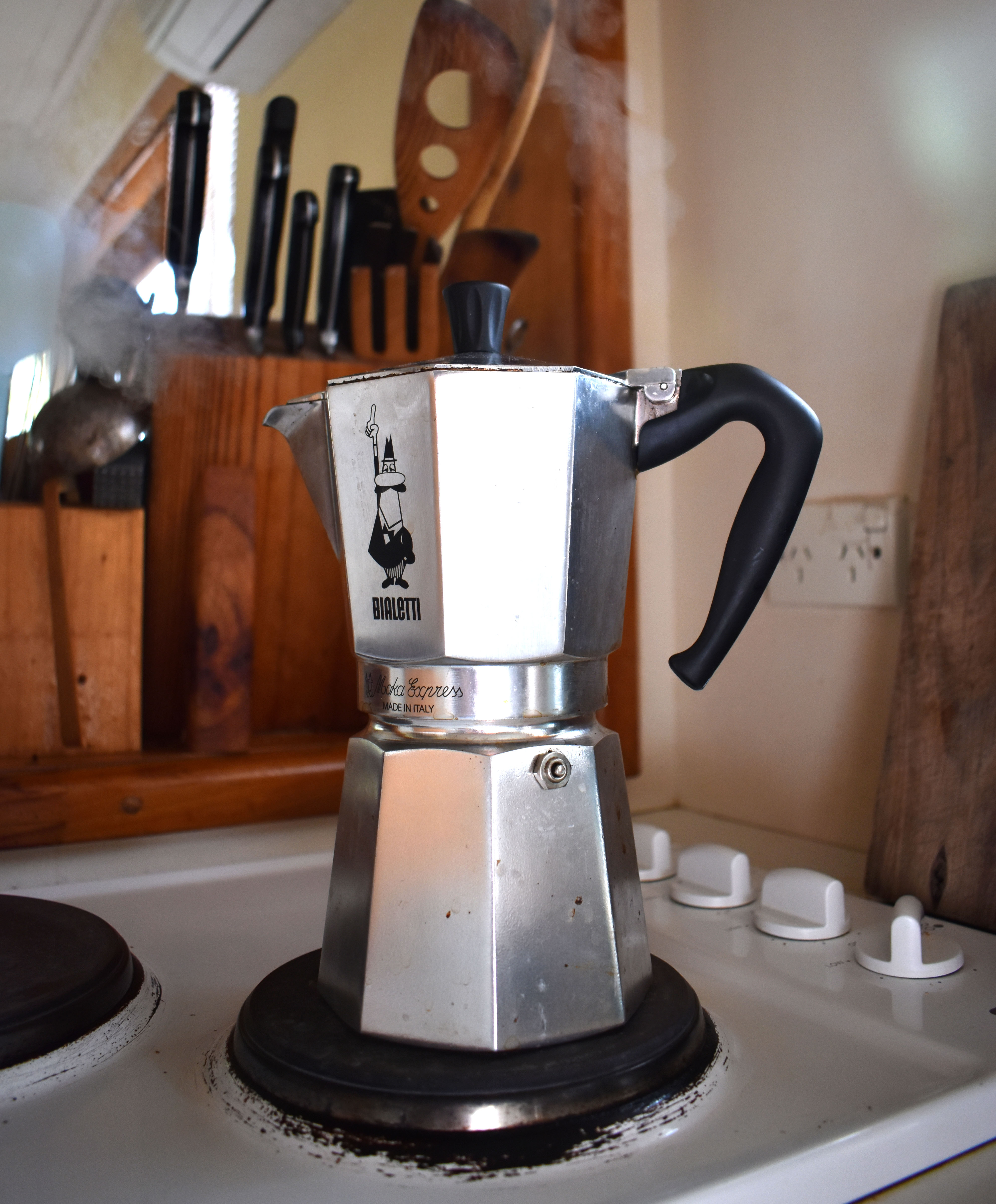 When I was a 21-year-old uni student, studying Journalism, Literature and Hangovers, my writing teacher was a bloke called Peter Temple. You might have heard of him. Later, Peter became a celebrated crime author, the first Australian author to win the UK CWA’s Gold Dagger, among many other accolades. When his fiction was first published, because I knew him,  I started reading it. I think it’s one of the reasons I chose crime when I finally decided to try my hand at fiction. Unfortunately, Peter died in early 2018, before the publication of Scrublands. Nevertheless, this brought a smile to my face. I was visiting book shops, publicising Silver, when I saw this: my book next to a collection of Peter’s writings. It was like coming full circle. 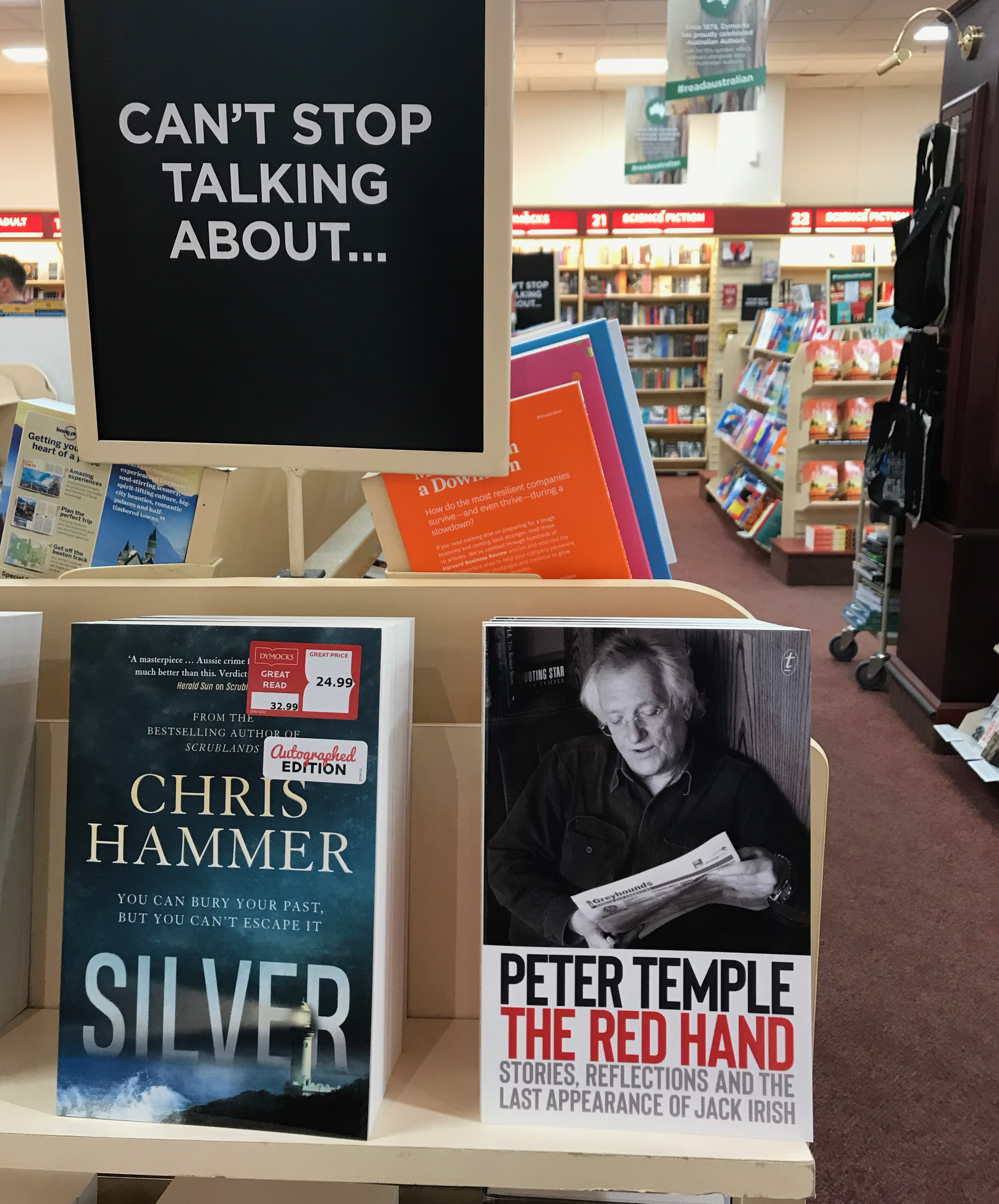 If you enjoyed this, check out our other 'Putting Authors in the Picture' blog posts in the Author Talk category of our blog.