If It Had Happenned To You

LoveReading Expert Review of If It Had Happenned To You

If It Had Happenned To You Synopsis

You’d have done the same. If you had come home to a house suddenly still and silent, if you’d fumbled your way out of all that black and heaved yourself into the shower, numb to everything but the need to wash off the dirt, wash off the sweat, the tears, the grief that had crusted over your every pore, you’d understand. You would have plunged under the shower head and half-opened your eyes, to flush out the image of the casket, the flowers, all the images that had seared themselves into the insides of your eyelids. If, after a minute, you’d leaned out of the merciful waterfall, if your vision had cleared enough to see the tiny imprints on that great big pink bar of soap in the tray -- the ones you’ve managed to overlook just now -- I can tell you what would have happened next.

You’d have gasped, inhaling a mouthful of shower droplets, and for a minute you’d have doubled over, half choking on the water, half gripped in a new convulsion of grief. And you’d have struggled to hold your eyes on the soap as you did, to take in for the first time this discovery, to confirm that it was what you thought it was. You’d have gotten a flash of the boy, the week before, taking the soap from your hand, of him dropping it in the water, reaching down, picking it up, squealing as it slid out from his hand again. You’d sob to remember his next attempt, when he dug into the thing with all his power, clawed into it until he’d made five little finger holes, like some crude soap bowling ball, and held it up in triumph before scrubbing himself down with it, pleased and proud to show you how well he could do it himself.

You’d have stayed under that shower for God knows how long, your only motion the regular wiping of your eyes against the twin floods of water and tears, staring hard at the scarred soap beauty. Finally you’d have reached for it, brought your fingertips within an inch of the child-sized divots in it, longing at once to burrow into each one and to stroke the ghost of his hand that you could almost see in the impression he’d left behind for you. But you’d have lowered your hand fairly soon, and shut the shower off soon after that. Call it what you want now, it would have seemed like the only option to back away from that fragile relic, to towel off your still-soiled body, comb back your hair and pull on a shirt and jeans. You’d have made the trip to the corner, bought the new bar of soap, and the new soap-dish to put it in, in its new place on the rim of the tub.

In the days following you’d have shed tears as you cleaned yourself, seeing the boy’s fingers clawing into the untouched soap in front of you as you wrung at the new bar in your hands. You’d have spoken to him, since that small part of him was so present, so inversely visible. You’d have sobbed the expected “I’m sorry,” and, “I love you,” and even though you’d always hated those airy-fairy types who spouted that ‘sixth-sense’ garbage, you’d have bought it wholesale -- for those few minutes, standing in a man-made rain that would slowly grow tepid, you’d bawl those words at that soap and know that they were reaching him. Once a day, you would indulge in the insanity: he’d made those marks, you would see him, so he must be there. The fantasy would have drained away the minute you shut the taps, and you would have been left shivering, back in reality -- cold, but thankful that you’d regained that feeling once more.

And over time you’d have begun to look forward to having time with your memento. You’d have grown comfortable with the idea that, in this one secret place each day, you could reach across that impassible void and touch an otherworldly body. Soon the cries of “I love you!” would have given way to quick kisses at the air, winks and whispers of “Love ya, kiddo.” And you’d have stepped onto your bathmat, toweled off the previous day’s grief and set off to brave the new morning. 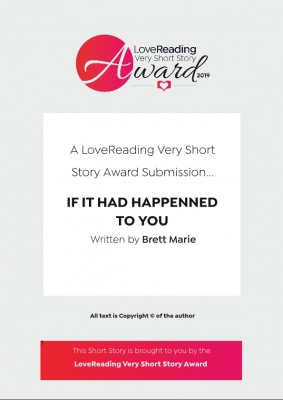 View All Books By Brett Marie