Part of the Diffusion Books Series

Liam loves visiting the local pet shop and is desperate to have his own snake. Then one day, Mr Nash, the owner of the shop, disappears. What has happened to Mr Nash? And how far will Liam go to get what he wants? This book is particularly suitable for adults who are new to reading (emergent reads). It includes 'What do you think?' questions at the end of each chapter. 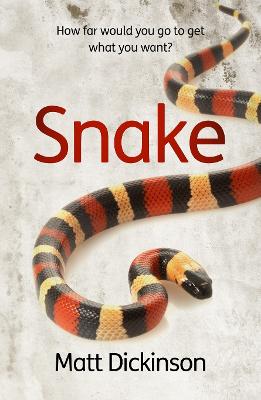 Matt Dickinson writes for both adults and teenagers. His books for adults include the thrillers Black Ice and High Risk, as well as a bestselling account of his ascent of Mount Everest's deadly North Face, The Death Zone. For young adults, he has written an action-packed series called Mortal Chaos, and the stand-alone thriller Lie, Kill, Walk Away. As a film-maker, Matt has worked extensively for National Geographic Television, the Discovery Channel and the BBC. He is one of very few people to have ever filmed on the summit of Mount Everest.